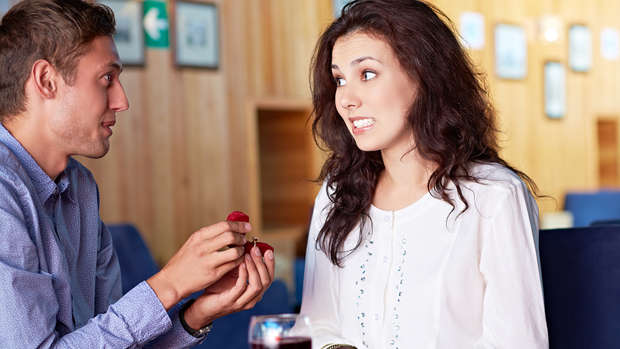 Most brides cry when their partner pops the question - but not for the reason one woman shared on Facebook.

The Italian bride-to-be said she burst into tears when her fiancé proposed to her with "the ugliest engagement ring".

She shared a photo of the ring to the Facebook page That's It, I'm Ring Shaming, admitting that she had "cried a lot when she received it".

The design has since been compared to the Phantom of the Opera, a Teenage Mutant Ninja Turtle, and Iron Man.

The unique ring showcases a silver mask and what appears to be pursed lips engraved on a gold band.

"Is this some sort of optical illusion? I tried turning the phone a few different angles, but it's still hideous," wrote one. Another commented saying they'd cry too if someone tried to give them that ring.

"This is literally the ugliest thing I've seen in a long time."

"I think this is the worst I've seen so far in this group."

But despite her tears, the woman admitted she'd said "yes" and had worn the ring once.

Facebook commenters couldn't believe it - with one saying, "You didn't say no? That is a ring to say no to."

Commenters competed to see how many film characters they could compare the design to.

"Oh, this is that new Marvel line of jewellery. This is the Iron Man band," commented another.