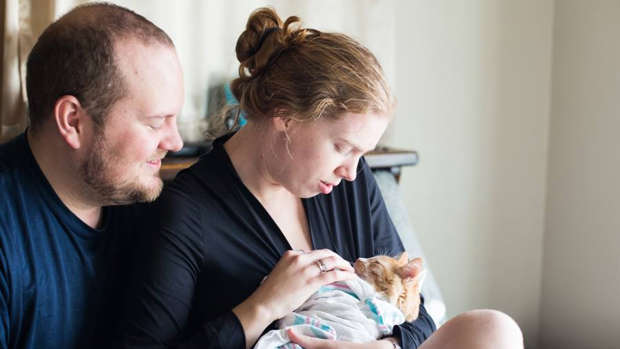 It’s not uncommon to see obnoxiously happy friends sharing intimate pictures of their newborns on Facebook, or even for them have a photographer in the delivery room.

Amongst all of these baby announcements, one woman decided to share photos of her own little bundle of joy: a tiny ginger kitten.

In a series of photos taken by photographer Elizabeth Woods-Darby, Lucy Schultz 'gave birth' to her fur baby.

The pictures show Lucy and her partner holding their kitten, imitating how new mums and dads often pose in with their human babies.

However, some of the images are a little confronting, showing the kitten popping out between Lucy’s legs.

Along with the photos, Lucy wrote on Facebook: "On 1/10/18 we welcome our first baby kitten, a neutered male DLH. He is 22" long and weighed 6 pounds 7 oz. He is already eating solid food. Name to be announced. We are so in love."

While some thought the post - which has since gone viral, earning more than 76k shares - was rather stranger, several people commended Lucy for having such a great sense of humour, with some saying they wish they had done something similar with their pets.

Lucy told 9NEWS that she’s OK with people thinking she’s "a little odd" for the shocking photoshoot, saying that that's just who she is.

"I’ve been thinking of this idea for a while because I’m totally a crazy cat lady who didn’t have any cats," she said.

"So, I decided as soon as I got a cat, it’s a big milestone for me and sort of like the hallmark of me settling down and starting my menagerie of future cats, and so the first one is pretty special."