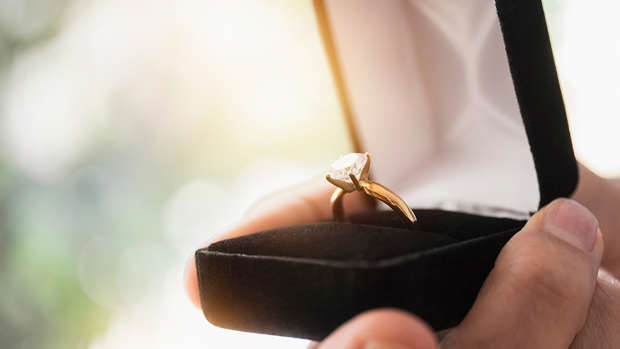 One woman has been slammed online after she not only discovered the engagement ring her boyfriend had hidden and was planning to propose, but revealed she wasn’t good enough.

Sharing a photo of the three-stone diamond ring to a ring-shaming Facebook group, the nameless woman explained how she found the piece of jewellery in her partner’s nightstand and was "not a fan" of the traditional-looking ring.

"Ewwww … Found this in the BF’s nightstand. Not a fan," she wrote alongside the photo of the engagement ring. She then encouraged people in the group to "roast" the ring and even asked for advice on how to "tactfully" turn it down.

"Please roast and then tell me how to tactfully say no you need to get something different."

Let’s just say users on Reddit less than impressed with the fiancé-to-be's "attitude".

"Girl that ring is worth more than you with that attitude," one person snapped back.

Another added: "I still am amazed by how ungrateful someone can be when someone’s willing to spend that much money on them."

While another suggested the woman was acting "spoiled" for not liking the ring.

"My man could propose to me with a Walmart ring and I'd be happy," the user wrote. "How can you be so spoiled and ask people to roast it?"

"If I was him, then I’d do one better. I’d go get a different girlfriend," another said.

However, others came to the woman’s defence, with one person saying that she wasn't being unreasonable for not liking a ring that didn’t fit "her taste".

"Honestly, reading the comment, it seems that most people are missing her point. She’s not saying it’s too small or too inexpensive – she’s saying it’s not to her taste. That’s perfectly reasonable," the user wrote.

"I think the key here is that she’s asking for help tactfully telling him she would prefer a different ring. Should she have asked for advice in a different way? Absolutely," they continued. "But does she deserve to be dumped over it? Not based on the limited information we’re given from this post."