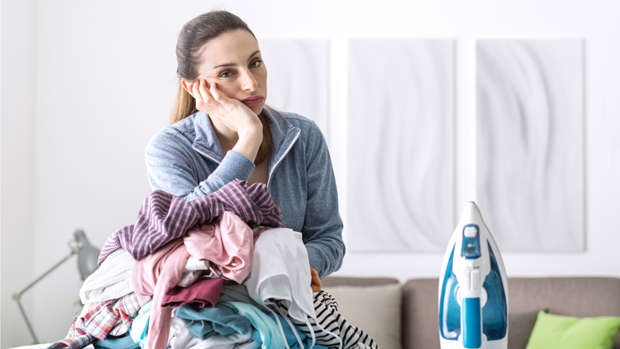 A woman who has been married to her husband for 10 years sparked a heated debate among other ladies when she asked if she should divorce him because he repeatedly ruins her laundry.

Speaking to users of Mumsnet, the anonymous woman wrote that her husband had repeatedly ruined her hand wash only underwear in the washing machine throughout the years they've been together, according to the Daily Mail.

She entitled her thread; "To leave DH (Darling Husband) over ruined underwear?", explaining that while she's aware it sounds dramatic, she "can't stand his incompetence" anymore.

The woman received a flood of divided responses from those who believed she should leave and those who thought she was overreacting.

Writing under the handle 'Sprinkestar', the wife wrote: "Ok, sounds dramatic, right? But... We have been together years, known each other forever. Today, yet again, he washed my hand wash only underwear in the machine and ruined it. I have lost count of the number of times he has done this".

She shared feeling frustrated with the situation, having addressed similar scenarios with her husband previously.

Her thread received a large number of responses with many suggesting her idea to leave him as an overreaction. Some people shared that they believed the problem could be solved by purchasing machine washable underwear.

One person wrote: "Your dearest husband does the laundry, in my eyes that would make him a prince among men and a definite keeper. Just buy machine washable knickers".

Another said: "Does he hurt you in any way, if not then stop being such a diva and go to a supermarket and buy knickers like most of the human race that can be chucked in the weekly wash".

The wife responded to say that she believed the scenario was a sign of a bigger underlying problem as the items had already been separated to avoid damage.

She wrote: "It's the sign of a bigger problem. He just can't be arsed to take the time to think where I'm concerned".

Other users agreed with her and said his behavior showed that he disregarded her.

One person said: "He is showing a total lack of care regarding her stuff. And also that he thinks that doing some house work and putting the washing to fog is such a huge attainment for him that he doesn't need to bother with the details".

Another wrote: "It's actually nothing to do with underwear- it's the fact that (yet again) he couldn't be bothered to give you a moment's thought".

Some people shared that they felt her husband should have to pay to replace the damaged items as a lesson to be more mindful.