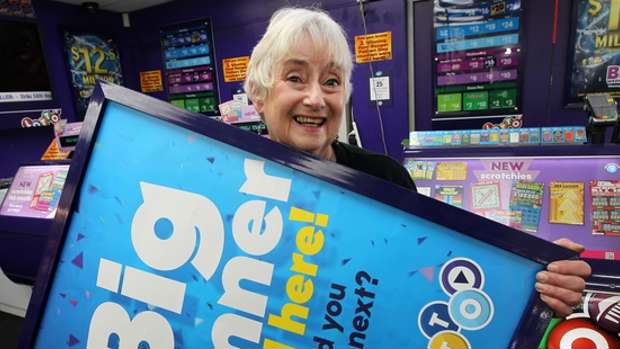 Annie Belk, "the Lotto girl" at Unichem Stortford Lodge, was delighted to hear that someone who bought a ticket there is now $8.1 million better off. Photo / Duncan Brown

Saturday night's winning Lotto Powerball ticket worth a cool $8.1 million has gone the Hastings way - to a very lucky person as well as a very lucky sales outlet.

The ticket was sold at Unichem Stortford Lodge, where staff were yesterday wondering who it might have been, and waiting for them to appear with the ticket, and a huge grin.

"Nobody's been in yet though," the pharmacy's business manager Carol Ormerod said yesterday afternoon, speculating that to ensure complete anonymity they may choose to go direct to Lotto HQ in Auckland.

"With the ticket strapped to their body."

"It's really exciting to hear and it would be nice if it's a local and a regular," she said.

There was the chance the lucky winner was not aware and could call in to have it checked.

"That has happened with some of the smaller prizes - they don't know until we tell them."

She said staff would accordingly have a chair ready should the Powerball winner call by.

They may also have a bottle of bubbly in the fridge.

"Yes, that's not a bad idea," she said, adding that if the winner were to cash it in elsewhere there was always the prospect of a celebratory staff morning tea.

A decade ago, when it was known as Radius Peter Dunkerley Pharmacy, it was dubbed the country's luckiest Lotto outlet - at that stage having dispensed about $23 million in prizemoney.

The latest big win is made up of the $8 million for the Powerball and $166,667 from the Division 1 pool, which was split six ways.

It was the ninth Powerball of the year to be claimed and continues the Bay's solid run.

In June last year a Hastings supermarket sold a $13 million Powerball ticket - it picked up half the $26 million which was going.

And in June 2012 a Napier man walked away with $10,333,000 after scooping the big one with a ticket bought at a Napier supermarket.

The second most successful outlet in the bay is Andrew Spence Pharmacy which has sold about $32 million of major prize-winning tickets.

It has also sold a Powerball winner with $12.6 million paid out on that occasion.

However the latest win takes the Unichem Stortford Lodge outlet up to $47 million and puts it a long way in front as "the luckiest Lotto shop in the land".

The win was also the seventh Lotto first division sold in Hawke's Bay this year.