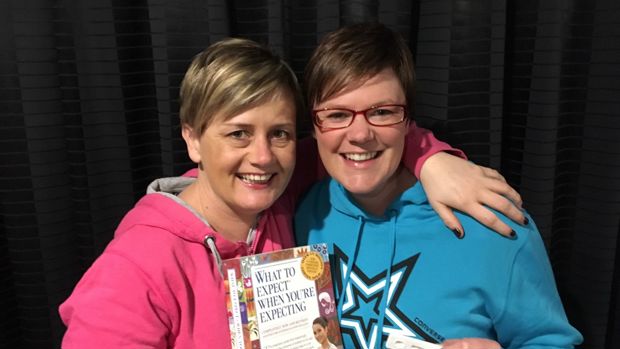 Check out our column every Wednesday in The Vibe magazine of Hawke's Bay Today!

When it’s your job to do a radio show each day, a certain amount of preparation is required.  Yes there are things that happen just before or while you’re on air that need to be addressed, or spontaneous topics that take off after a small mention of something.  But you always have to have a skeleton of what the show will contain.

When it came to preparing Monday’s show, Adam and I knew that I would be sharing some news.  After years of waiting and months of trying through Fertility Associates, I am expecting my first child. I am obviously delighted with this news and was happy to share it with everyone as we have been quite open about the whole journey.  It’s very early days yet (the baby is currently the size of an apple seed) but we have been overwhelmed by the amount of love and support everyone has shown.

Adam and I were not expecting to share a big announcement of Adam’s however.

Ever since Woman’s Day declared they were searching for the Hottest Hunk in New Zealand radio, we’ve been campaigning to try and get Adam into the top ten.  We knew it would be a tough ask as there are many radio announcers who broadcast to a nationwide audience and we of course only broadcast in Hawke’s Bay.  But the public rallied and nominations flooded in for Mr Green.  We thought maybe he might have a chance but as we’d heard nothing by Monday morning figured he’d missed out.

Then Adam did a quick internet search and discovered he had in fact made the top ten!  Quite a feat when you consider there’s only one other regional radio announcer who shares this claim to fame.  So suddenly we had two huge announcements to make and I couldn’t decide which one I was more excited about.

In hindsight, I’m clearly more excited that I’m growing a human being, but sharing a show with a man who’s considered to be one of the top ten most attractive men in New Zealand radio is pretty darn awesome too.

It’s fair to say I’ll never make it onto a similar list so I must share the glory where I can.  Adam now proudly wear’s his “Almost a hunk” cap wherever he goes…if you want to help him get a cap that says “Actually a hunk” please vote HERE