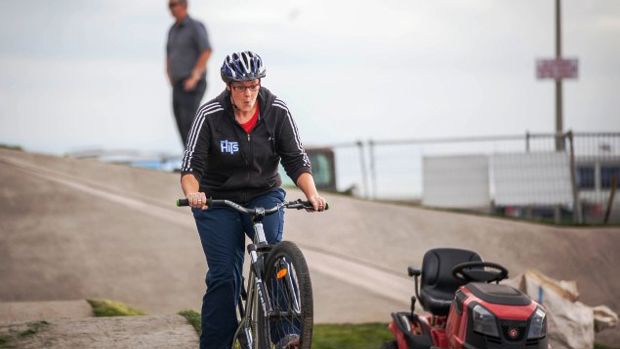 When we first heard that a Bike Pump Track was going to be built on Marine Parade Napier, Martin’s initial reaction was “Cool!” while Sarah’s was “A what?”

Now that it’s finished and ready for use, Martin is very impressed and Sarah now knows exactly what a Bike Pump Track is, as she was one of the first people to use it!

Last Friday, while Martin sat on a ride on lawn mower grumbling about how he couldn’t try out the track because of his dickey knee, Sarah was sitting on a bike atop the hill where the track starts, fearing for her life.   With white knuckles and very sweaty palms, Sarah started to roll towards the edge, and then slowly eased back again.  And again.  And again.  After about her 5th almost- but- not- quite start, Martin yelled at her to stop mucking around and just get on with it!  With one last deep breath, Sarah perched the bike on the edge of the VERY steep decline (not actually that steep) and released the brakes, just a little.

Squeaking her way down the hill, Sarah was off on her hair-raising ride around the track at a speed of at least 70kmph.  At least that’s what it felt like for Sarah.  In reality, there were snails passing her.  Martin was worried that she might actually stop and start going backwards, such was the lack of hustle.  Sarah was quick to point out its very easy to sit and judge while you’re laxing out on a lawn mower that’s not even moving.

There are several tracks to choose from and despite Sarah’s fears she really enjoyed the experience and is sure kids and big kids will love this new form of entertainment Napier has to offer.  You can check out a video of Sarah’s thrilling bike ride HERE

If you are sticking around in Hawke’s Bay over the long weekend, you’ll likely see many cyclists around the streets and trails.  You won’t see as many lycra clad bottoms as are usually on display during a cycling event, because there is no element of racing in the Big Easy; the idea is to take your time completing the 45km course.  Church Road is the final destination and the ride finishes with a cool concert…and probably a glass or two of something else cool as well!