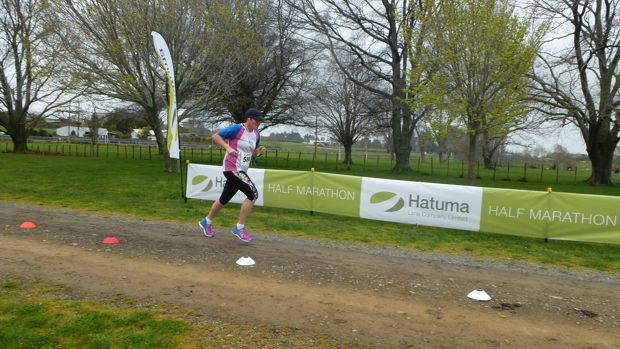 Sarah completing the Hatuma Half Marathon in Waipukurau

Martin is rueing the day he encouraged Sarah to take on a half-marathon because now she’s done it and he hasn’t heard about anything but since. Except her butt.

Yes the girl who every year asked her friend to push her into the creek during the school Cross Country so she wouldn’t have to complete it ran 21 kilometres around Lake Hatuma on Sunday and completed her first half marathon.

The body was naturally a little stiff the next day but yesterday, Sarah found she couldn’t sit down due to some major pain in her tail bone.

Confused as to what could have caused this, we consulted our station doctor (actually a real doctor not just a workmate who claims to know a lot about medical issues) and he diagnosed Sarah with Sacro-coccygeal ligament strain which he says can certainly be caused by running.

“What’s the solution?” We asked. To which he responded “A GOOD massage should sort it out.”

So naturally, Sarah asked Martin to do the decent thing and rub her bottom.

Sarah pointed out the doctor had specifically prescribed a GOOD massage and as that is Martin’s last name, the doctor clearly meant for him to do it.  Still he declined saying “there is no way I’m going near that thing.”

Sarah was surprised when no other workmate offered to come to her rescue either and have advised her that self-massage is probably her best bet.

Sarah was also surprised recently by the response we received from the public over something she was sure they would disapprove of. Martin and his wife celebrate their 20th Wedding Anniversary next year and Martin is planning a romantic trip away.

He’s recently discovered that Black Sabbath will be playing in Melbourne at the same time that he and his wife will be there and thinks it is perfectly acceptable to leave her in the hotel room with a good book and a bubble bath while he rocks out one last time with Ozzy Osbourne.

And the majority of people agree with him!

One texter said “100% appropriate to book Black Sabbath tickets! It’s their last tour so of course why miss out?”

Jas weighed in with “Yeah Martin got to be done. If she's been there for 20 years she will be there for another 20.”

So Sarah had to concede that perhaps it is fair enough for him to go out alone for just that one night, at which point Martin not-so-politely reminded her that no one asked her anyway.