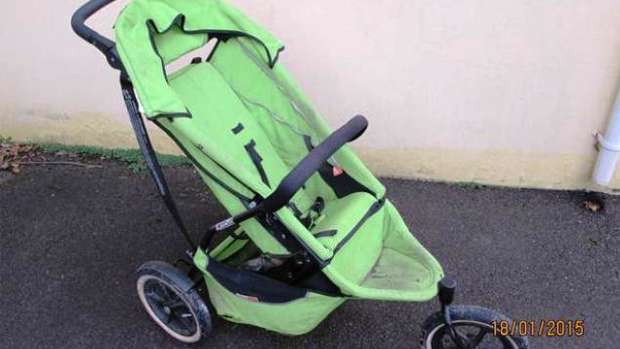 Weary fathers of the world have united in sympathy for a British man who listed his children's buggy on eBay so that "you too can screw up your life".

"Here we have for sale the green monster that can only be Phil and Teds. I shall be glad to see it leave my premises and never return.

"This was purchased against my wishes many years ago as I never wanted any children and a buggy signified my wife's intent to have children. We argued much and this buggy signifies everything that ended my happy carefree low cost child free life.

"Anyway as you can tell I hate the buggy. I now have 3 children, and a Labrador and am forced to endure the school run where women I don't know try and discuss the price of centre parc holidays, and the benefits of the micro over the mini micro scooter. To summarize my life is over and this green albatross needs to go round some other poor sods neck.

"On the positive none of my three children were stupidly fat, but its been driven by my wife a lot so not all good. During its lifetime its had pretty much every bodily fluid known to science, (and several that have yet to be discovered) chucked over it by my children, Its also absorbed its own weight in Ellas Kitchen meals, and mud.

"I have tried to maintain this item as best I could and the wheels were filled with green slime to prevent punctures, and WD40 has been used with gusto on the relevant parts. It even comes with what I lovingly refer to as the Cinderella attachment for the second child you have but dont love as much as the first. It means they can sit but cant see anything, and have a ride thats about as comfortable as a Ford Model T.

"All of my children are now walking (often in completely the wrong direction) but someone else deserves to give this a good home. Over the years I have collected spare bits from other zombified fathers who were once full of life and I will throw these in as well.

"According to the other half she has the baby carry item that came with this and the pannier bags (whatever they are) but she never used them and they are immaculate and will be listed when she conquers her fear of heights and gets into the loft.

"This buggy has never been used for dog sledding, racing, or buggy bumper cars, although I once used it to concuss a randy Alsatian that tried getting amorous with my lab.

"There are many adverts on here for immaculate models and these people are all liars and scoundrels as nothing that comes into contact with a young child is ever immaculate.

"So for a starting price of just £9.99 you too can screw up your life. There are programs for those of you who need to recover from drugs or alcohol. Any money generated from this sale will be used to help me recover from children (and probably involve drugs and alchohol)