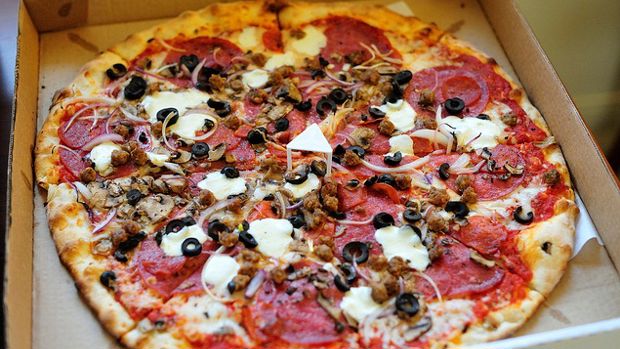 Recently, in a Reddit thread titled “911 Operators, what is that 1 call that you could never forget?”, one man left the following comment:

I had a call that started out pretty dumb, but was actually pretty serious: “911, where is you emergency?”  “123 Main St.”  “Ok, what’s going on there?”  “I’d like to order a pizza for delivery.” (oh great, another prank call).  “Ma’am, you’ve reached 911”  “Yeah, I know. Can I have a large with half pepperoni, half mushroom and peppers?”  “Ummm…. I’m sorry, you know you’ve called 911 right?”  “Yeah, do you know how long it will be?” “Ok, Ma’am, is everything ok over there? do you have an emergency?” “Yes, I do.”  “..And you can’t talk about it because there’s someone in the room with you?” (moment of realization)  “Yes, that’s correct. Do you know how long it will be?”  “I have an officer about a mile from your location. Are there any weapons in your house?”  “Nope.”  “Can you stay on the phone with me?”  “Nope. See you soon, thanks”  As we dispatch the call, I check the history at the address, and see there are multiple previous domestic violence calls. The officer arrives and finds a couple, female was kind of banged up, and boyfriend was drunk. Officer arrests him after she explains that the boyfriend had been beating her for a while. I thought she was pretty clever to use that trick. Definitely one of the most memorable calls.

BuzzFeed News spoke to the former 911 dispatcher who recounted the story of a woman who called to order a “pizza” but was in fact calling about domestic violence.

The comment was written by Keith Weisinger, who worked as a police dispatcher for three years between 2004–06 before attending law school.

Weisinger first posted the story to an AskReddit thread five months ago but it was only picked up by media sites last week. In the thread, he speaks about his experience of being dispatcher.

Today, Weisinger is an environmental attorney with the United States Environmental Protection Agency and lives in Portland, OR. “This call occurred almost 10 years ago,” he told BuzzFeed News. “I worked the graveyard shift, 6pm–6am, and I remember this call being pretty late – close to midnight.”

Weisinger said the woman – who he believed was in her 30s – was calm at first, but gave short, hurried responses. “I remember feeling relieved we had an officer close by who could respond quickly,” he added.

Weisinger said he never found out what happened to the woman after she called.

“This is a part of the job most 911 dispatchers find frustrating. Beyond the immediate resolution – arrest, hospitalisation, etc – we rarely hear what happens to the people who call.”

Occasionally, callers make an effort to meet the dispatchers who helped them through a traumatic experience, but Weisinger said that typically the only way dispatchers will know what happened afterwards is if officers or paramedics make a point of keeping in touch with the person.

Weisinger said that from a 911 dispatcher’s point of view, spousal abuse occurs on both sides of the gender spectrum, but it occurs male-on-female far more frequently.

“I would say 90% of the calls that involved an emergency situation like this were husbands or boyfriends being violent towards significant others.

“I bring this up because when a female caller seems distressed, experience would guide my questions differently than a distressed male caller. So when I first sensed something wrong with this caller, my first thought was a domestic disturbance.”

He added that when he asked her if she had an emergency and she replied “yes”, the only thing he could assume was she was trying to talk around someone in the room.

Were domestic-violence calls common for Weisinger when he worked as a dispatcher?

“Generally a 911 dispatcher handles two types of call – medical or law enforcement,” he said. “Medical calls are more frequent, but if I had to guess which type of law enforcement call my department handled most, it would be domestic disturbance.”

He went on to explain that domestic violence includes spousal abuse, large family fights, child abuse, and generally anything that escalates beyond a typical verbal fight.

“I dispatched for a county of 200,000 people and I would say I handled one or two domestic disturbance calls a night. Frequently, drugs or alcohol were involved.”

Weisinger stressed that although he helped in this situation, the credit needed to be given to the caller.

He praised the woman for her bravery and smart thinking. “Whether she had thought of this trick before, or it just came to her,” he said, “she indicated the urgency of her situation without giving away the true purpose of her call.”

Does Weisinger have good memories of his time as a dispatcher?

“I loved my experience of dispatching. I enjoyed working with fellow dispatchers, officers, and helping to serve the public, and I think most dispatchers share my feelings. I make a point every Christmas to call my local police/fire agency on their non-emergency line, and thank the dispatchers who would rather be with their families.”