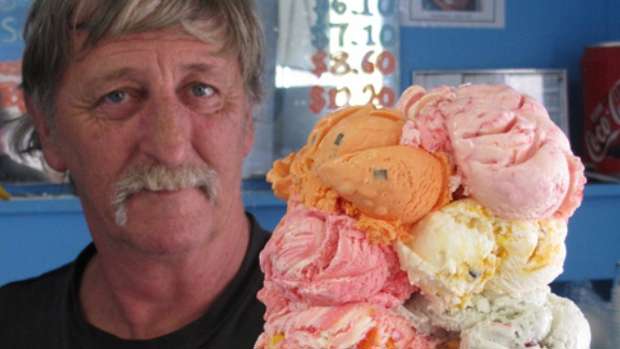 Northland's contender for the world's biggest icecream on a normal cone has reported a lot of interest but no takers for its latest creation.

Staff at Waipapa's State Highway 10 Seafood Takeaways were at the ready after the Herald revealed the shop's challenge to eat all of its 15-scoop monster, called the Highway 10 To Hell.

However, owner Mike Pickett said he had been "flat out" serving treats other than his biggest creation, which weighs in at 2.85kg and is priced at $18.60.

"No one tried today - they're not brave enough," he said. "Previously, we've had two attempts at the 15-scoop and both failed."

"No big ones today, people were chasing the little fellas."

Previously, singer Stan Walker finished the Death By Ice Cream in each of two visits and Maori All Black Joe Royal also finished it, to claim the prize of a free meal.