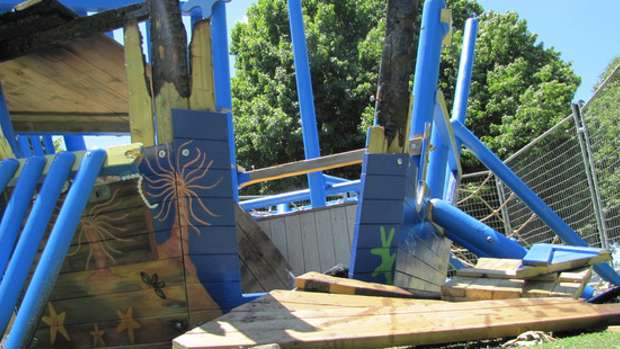 A pirate ship replica built in a Hastings playground after last Easter's torching of an iconic wooden pirate ship in neighbouring theme park has itself been destroyed after a second arson attack in less than 48 hours.

Hastings District Council communications manager Diane Joyce says the new boat, part of Lions Community Park opened only at the end of November, cannot be repaired and it will be "pulled-down tomorrow."

The Fire Service was called to the playground off Sylvan Rd, at 5.29am today, having also been called just after 7am on Friday.

While council were able to make repairs and have the popular playground feature open again for the weekend it's now surrounded by two-metres high security fencing, at least three of its major support poles badly charred as a result of this morning's fire.

On Friday it was reported damage would cost about $3000 to repair, but the ship, imported from Germany by a company contracted by the Council to help develop the park, cannot be repaired a second time.

The Council stressed today the ship was was not a "replacement" for Splash Planet's 20-metres long wooden pirate ship, which was built in 1977 in a moored position in what was then a Fantasyland pond.

Destroyed in a morning fire on April 5 last year, it was insured and no decisions have yet been made on what will be done to replace that ship.