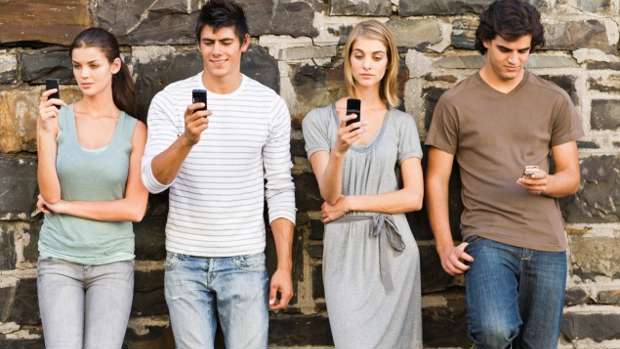 The Debrett’s Handbook on good manners is the culmination of more than 10,000 enquiries received from around the world in the last 12 months.

'Debrett’s receive more enquiries about mobile use than any other device. It is always rude to pay more attention to a phone than a person in the flesh, and they should always be put away when transacting other business – for example, when you're paying for something in a shop. 'They should be switched off in theatres, cinemas (including during the trailers), art galleries, or any space where silence is desired.'

'As electronic cigarettes become more popular, so to do the number of enquiries that Debrett’s receive on the device. 'The most pressing question is whether they are acceptable in the workplace. They should never be used in a work environment. 'Vaping shows that you’re not focused on your work and may also be a distraction to your colleagues.'

SOCIAL GREETING: KISSING 'Many people are clearly unclear on the subject of social kissing. Kissing is not appropriate in many professional situations. 'On the whole it should only be used among friends, but not on first meeting. An air kiss, without contact, may seem rude or impersonal, so very slight contact is best but no sound effects are needed.'

EATING AND APPLYING MAKE-UP ON PUBLIC TRANSPORT 'Following the recent controversy surrounding public-shaming websites, Debrett’s has been inundated with enquiries as to whether it’s acceptable to eat or apply make-up on public transport. 'You should avoid both. It’s inconsiderate to eat smelly food in a confined environment and applying make-up on public transport can jeopardise that all-important first impression and make you appear disorganised.'

RECLINING YOUR SEAT ON AEROPLANES 'This is a common bugbear. It's selfish to recline your seat back during short daytime flights. When travelling by plane, always stay within your own designated space and don't hog the armrest. 'Also avoid kicking the back of the seat in front of you or using it as an aid to standing-up.'

GIVING UP YOUR SEAT ON PUBLIC TRANSPORT 'In a recent university experiment only 20 per cent of London tube passengers offered to give up their seat to a visibly pregnant woman. 'Passengers should always offer to give up their seat to any individual that is pregnant, elderly, or clearly in need. 'It is important to remember, however, that it is just as rude to aggressively decline the offer of a seat as it is to not offer a seat.'

BLIND COPYING (bcc) 'Blind copying should be used discerningly as it is deceptive to the primary recipient. Instead, the email should be forwarded on to the third party, with a short note explaining any confidentiality, after its distribution. 'If blind copying is essential – i.e. for a confidential document where all recipients must remain anonymous – then the sender should address the email to themselves, and everyone else as ‘bcc’ recipients.'

EATING BEFORE EVERYONE IS SERVED 'Is it rude to start eating at the table before everyone else has been served? The simple answer is yes, unless the host or hostess gives their permission for diners to start.'