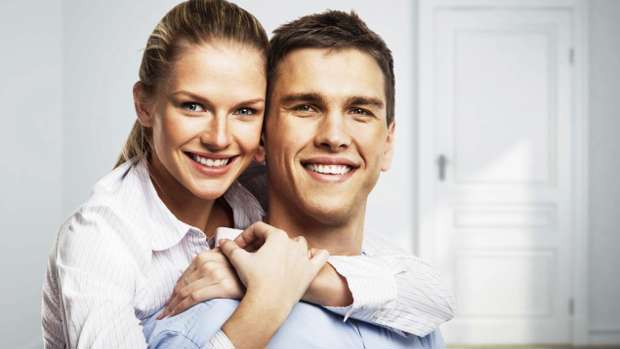 1. They're not afraid to fight. Oh yeah, successful couples definitely fight. Definitely. And they aren't afraid of it one bit. Because what successful couples know that most others don't is that fighting makes the little things go away. It unleashes what's at the heart of misunderstandings and sarcastic side comments. Any hidden feelings are shoved right out into the spotlight and are forced to be acknowledged. Yikes. But happy couples don't shy away. They listen, they argue, they talk, they solve. They fight clean, but they don't hold back their truth. They figure out their stuff. And, wouldn't ya know it, after the smoke clears and the fighting is over, all of those itty-bitty, annoying-as-hell problems seem to vanish. And thank goodness for that.

2. They apologize and bounce back quickly. Although happy couples aren't afraid to spend a night hashing it out, they bounce back at an exceptionally fast rate. There's no grudge holding, no pouting, no resentment and definitely no rebound fight introducing itself around 10 p.m. on a Saturday night. (Gah, those are the worst.) Successful couples frankly aren't interested in wasting every moment bickering. They know that when a fight is over, it's time to say sorry and get on with their relationship. However, they do not skip over the apologies -- those are incredibly meaningful. Apologies establish respect, empathy and the fact that (s)he was LIST-EN-ING. But once those two golden words are spoken, it's on. Sorry, rebound fight, it's date night.

3. They lean on each other. Happy couples come to each other for comfort, for support and for counsel. They respect each other's opinion, and trust that they are being heard. These couples know that whatever they're going through, their partner will understand. Or at least try to. There's no pride in these relationships. They know that they can't handle everything on their own, so they don't even try. They share, they discuss, they ask and they listen. They support. If she is having work problems, he's there to defend her thought process and help her with tomorrow's battle. If he's in a weird family argument, she's there to navigate the mess and to offer help in seeing the bigger picture. If she has a really tough decision in front of her, he's there analyzing the pros and cons with her, while still encouraging her to trust her judgment. And you know if he's in the wrong, she's definitely on his side, challenging and listening the whole way through. They're partners, they're advocates and they're friends. No matter what.

4. They don't compare their connection to that of other couples. Just like you don't compare your dog to someone else's dog, successful couples don't compare their relationship to someone else's relationship. Love trumps comparison. Successful couples cherish their idiosyncrasies and complicated layers, so they naturally realize that the frequency of others' fights or the size of a wedding ring doesn't have anything to do with their happiness. Their success is only measured by their own opinions, and it is never based on how their friends' relationships are doing. Plus, they would, like, totally win that competition anyway. Kidding.

5. They use each other's love language. Before I continue, I am going to admit, that sometimes I think the 5 Love Languages are full of it. I mean, doesn't everybody want to be affirmed, touched, given gifts, granted quality time and have lovely acts of service bestowed upon them? Why would anyone want to pick just one?! Or even rank them? Shoot. I'd take all five any day. But, alas, it is evident that some of these displays of affection weigh more heavily than others for each individual. And happy couples recognize this. They embrace their partner's love language and try to use it as much as possible. They are also honest and open about their own love language. (So important!) If he loves gifts, then he owns it! Plus, he absolutely expresses the fact that her buying him that new fancy shirt makes him downright giddy. And, if she loves words of affirmation, then he focuses on those beautiful syllables she loves to hear -- regardless of whether or not a present is in her hand. They love each other, so they show it in a way that their partner can fully understand. Moral of the story: It can sometimes be challenging when others don't give and receive love the same way we do, but it's that realization and that effort that makes successful couples who they are.

6. They take care of themselves. Whether they see a relationship counselor together or they seek out their own individual method of self-help, they get it done. Successful couples know that the key to taking care of each other is to take care of themselves. They don't let their own emotional crap pile up and soil the relationship. (Ew.) Instead, they face their baggage on a daily basis, and work hard to make sure they are the healthiest they can be.

7. They don't let the past get in their way. Successful couples might know all about each other's exes and crazy experiences and not-so-flattering episodes... but they certainly don't hold it against each other. They appreciate each other's exes. Yes, really. They appreciate that these people molded their partners into the people they are today. Well, and also... that possibly, at some point... an ex may or may not have totally messed up and made us look rather mature and sophisticated and stuff. Riiiiiiight? Regardless, successful couples don't spend their relationship in the past. They choose to be secure in their current relationship. They reflect on their previous experiences, share a few deep moments and light laughs and continue to live in the present.

8. They know when to take five. Successful couples realize that alone time is an absolute necessity. So, during heated conversations, stressful encounters or any other instance that might merit some alone time, they jump for it. They understand that sometimes a breather may be the best thing to deescalate the moment and salvage the rest of the day. On another note, it's not lost on successful couples that one is probably an introvert and one is probably an extrovert. That's normally how it goes. So, they embrace their personalities without letting it offend the other. The introvert is allowed to skip the party for a marathon of The Mindy Project (GUILTY), while the extrovert can go to the get-together without feeling like they're leaving the other behind. They are secure enough to understand that Netflix and parties aren't going to break them up.

9. They don't "help shame." Meaning, they don't bark at their partner when they were just trying to help. Successful couples accept help in any way, shape or form. Even if it wasn't exactly the ideal gesture or at the ideal time. If one offers to do the dishes but perhaps didn't get every single spot... the other won't turn around to passive aggressively fix it. The spots aren't going to kill anyone. Or, if one offers to be the sous chef for the evening and royally burns the peas, the other won't 'take over' because "UGHHH, LOOK WHAT YOU DID! (inappropriate words)." Help is graciously accepted because it's NICE. Successful couples realize that help-shaming creates resentment and deflates any remaining desire for the other to help. Ever again. Imagine that!