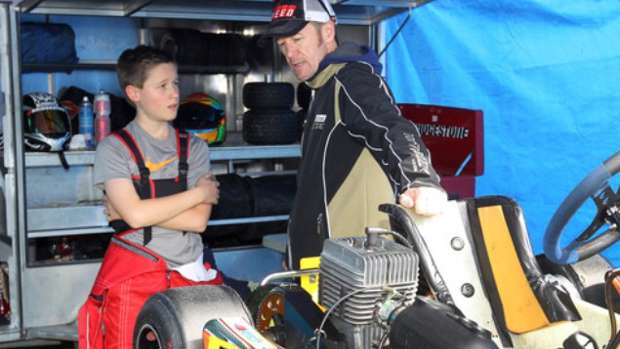 An attempt has been made to steal more go karts from the Roy's Hill Raceway near Hastings, just 48 hours after the theft of seven of the machines during the weekend.

Senior Constable Pehi Potaka, of the Hawke's Bay Police Tactical Crime Squad said the second raid was discovered about 3am yesterday, when three shipping containers used for storage were found to have been opened.

Two go karts he understood are used for defensive driver training for Hawke's Bay school students had been removed from the containers, but were still nearby on the grass.

He said it was possible the raiders fled when disturbed at the raceway, the home of the Hawke's Bay Karting Club, on State Highway 50, south of the intersection with Omahu Rd, Hastings.

Nothing else was reported to have been stolen in the incident, which came two days after the early-morning Sunday theft, including a kart raced by 13-year-old Ronan Murphy, son of motor racing driver and four-times Bathurst 1000 winner Greg Murphy.

Also stolen in that burglary were a distinctive steel-sided trailer and six karts used for the club's Have A GoKarts introduction programme.

Mr Potaka said the carts were among several "bigger-ticket" items of machinery and trailer items stolen in the Hastings area in recent months and still missing.

Among them was a 1.7 tonne Yanmar digger stolen along with a truck last week from a yard off Johnston Way, Whakatu.

Discovered missing on July 21, the yellow digger is still missing, as is a range of tools, but the Isuzu truck was found that day abandoned on a riverbank off State Highway 50 near Tikokino.

Both the truck and the digger had Unison company branding.

Also still missing are a chiller and trailer stolen from Havelock North in May, and a yellow and red home-made mini car stolen in March.

Mr Potaka said the go-kart raids were particularly distressing, and there must have been suspicious activity relating to them, and the other incidents.

Suspicious movements should be reported to the police at any station, by phone on 8310700 or anonymously on Crimestoppers ph 0800 555 111.