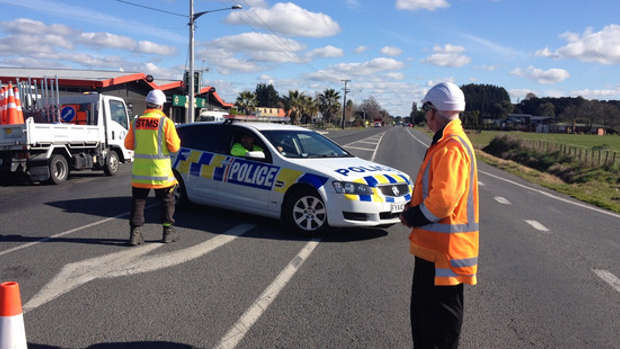 Contractors at the scene of an accident involving a car and a pedestrian at Morrinsville in the Waikato. Photo / David Kerr

A visually-impaired pedestrian suffered serious injuries after being hit by a car as he walked along a rural Waikato street today.

Police said the Morrinsville man, 31, was walking along the footpath towards Hamilton when he was struck by a car that had left the road and mounted the footpath.

The car, a white Mazda Familia, was travelling out of Morrinsville and as well as hitting the pedestrian, also struck the speed indication sign.

The crash happened near where the speed limit changes from 50kph to 70kph on State Highway 26 towards Hamilton.

Police appeal to any witnesses who have not been spoken to, to call police at Morrinsville or the Waikato District Command Centre on 07 8597807.