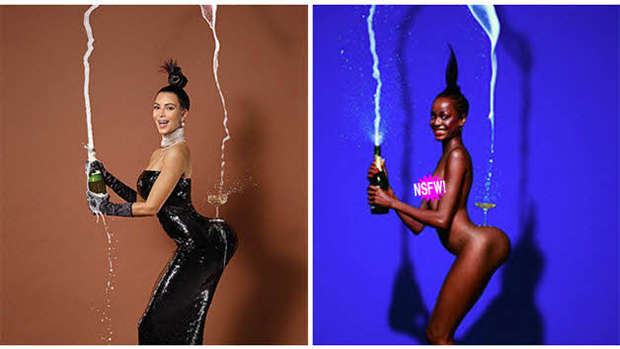 Photographer Jean-Paul took some quite literal inspiration from a picture he took back in the late 1970's, but the subject of the original photograph was chosen for reasons un-heard of in this decade, here is what Wikipedia has to say about the original model:

"Sarah “Saartjie” Baartman (before 1790 – 29 December 1815 (also spelled Bartman, Bartmann, Baartmen) was the most famous of at least two Khoikhoi women who were exhibited as freak show attractions in 19th-century Europe under the name Hottentot Venus—”Hottentot” as the then-current name for the Khoi people, now considered an offensive term, and “Venus” in reference to the Roman goddess of love."

People Magazine published about Jean-Paul and his controversial photos for the time back in 1979:

"Jean-Paul has been fascinated with women like Grace since his youth. The son of a French engineer and an American-born dancer, he grew up in a Paris suburb. From the moment he saw West Side Story and the Alvin Ailey dance troupe, he found himself captivated by “ethnic minorities—black girls, PRs. I had jungle fever.” He now says, “Blacks are the premise of my work.”