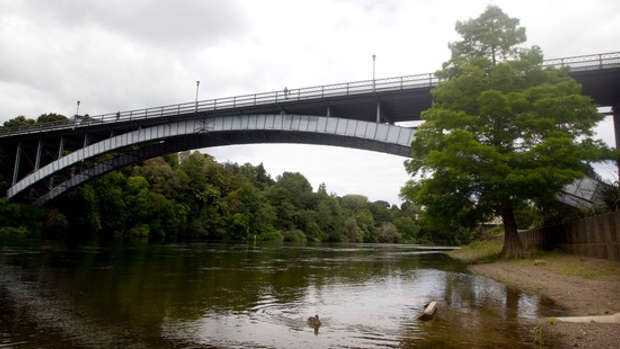 A person is missing in the Waikato River. Photo / Christine Cornege

Hamilton police are searching the Waikato River for a person they believe may have jumped in this afternoon.

Waikato police Senior Sergeant Juliet Burgess said they received a call from a member of the public about 12.30pm today saying they saw a woman jump from the cliff of the eastern side of the river, just north of the Cobham Bridge.

Ms Burgess said they were still trying to confirm further details but they sent officers to the scene and put the police boat in the water to look for the woman.

Family of the woman who jumped in are also at the scene.

An aunt said it was a young girl who jumped in the water, however they were reluctant to talk any further at this stage.

Family had set up a picnic blanket on the side of the river but have just left the area, along with police who have headed back to the station.

Staff from Hauraki Public health Organisation were also at the scene but the Thames-based duty manager did not know anything about the incident, why her staff were there or if the missing girl was known to staff.