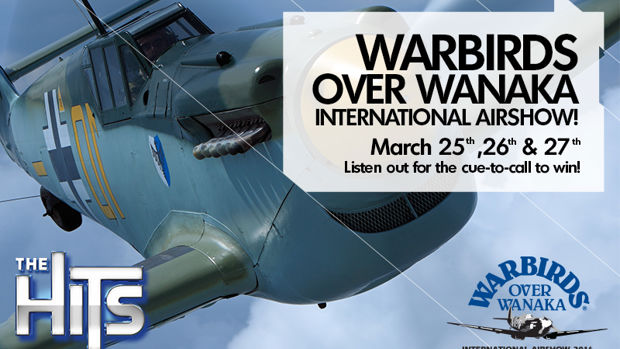 Warbirds Over Wanaka is a not to be missed event hitting the skies this Easter weekend - March 25th, 26th and 27th and The Hits have your tickets to be there amongst the action!

Tune in to Callum and P for breakfast and listen out for the cue to call to play 'Is it a Bird or is it a Plane' for your chance to win a family pass  to Warbirds Over Wanaka.

Be treated to non-stop high octane entertainment for the whole family.

A number of brand new acts have been confirmed for the Warbirds Over Wanaka International Airshow to be held at Easter 2016 ensuring the event should be one of the best ever.

* The Buchon Me-109 aircraft was the pride of the Luftwaffe and engaged in numerous dogfights over teh English Channel with the mighty Spirtfire. This is being brought out from England to take part in Battle of Britain 75th anniversary celebrations.  It’s been 20 years since an Me-109 has displayed in New Zealand and it could be many more years, if ever, before another appears in our skies

* The 2016 airshow will be the FIRST ever public flight for the Martin Jet Pack.

* Warbirds this year will feature a 5-ship Jet formation display featuring aircraft like the Vampire and Strikemaster.

* Pilot Liz Needham will be straffing the runway with six machine guns fitted to her P40 Kittyhawk.  Wanaka is the only airshow in the world where you can see this.

* Also new this year is a chance for five visitors each day to win an opportunity to be part of a Warbirds Over Wanaka display, tandem skydiving onto the airfield in front of the crowd with Skydive Wanaka.

* Plus a number of Air Forces will be displaying, along with sport aircraft involved in a short takeoff and landing competition and the best ever pyrotechnic display.

For more information and tickets go to www.warbirdsoverwanaka.co.nz or phone Ticketdirect on 0800 224 224.