Olympic champion Dame Valerie Adams never thought she'd look at a Barbie doll and see her own face staring back at her.

But now the celebrated athlete has become the second Kiwi woman to be immortalised as an official New Zealand Barbie Role Model.

Toymaker Mattel's campaign honours trailblazing women each year from around the globe, by creating one-of-a-kind dolls in their likeness.

Watch to Valerie Adams' interview with Jono and Ben above!

"I'm six foot four [1.9m], I'm a big Pacific Island woman. Never in my mind would I have thought something like this would be possible," Adams told the Herald.

The acclaimed shot putter, who never owned a Barbie as a girl, said she was shocked when approached to become one of just over 50 women to be made a "role model" since the campaign began in 2015. "To have them choose me was surprising but also very exciting," Adams says. "It's an amazing campaign and I'm really honoured to be a part of it."

Adams was heavily involved with the design process from the word go and says the team who created her doll were "awesome" to work with.

The doll comes with a tiny shot put and sports bag and features Adams' signature gold hoop earrings, hairstyle and even a replica watch.

"They got all the details right," Adams says.

"I have six tattoos on my body that are quite important to me, and they definitely showcased me. When I look at the Barbie, all I see is me. The bun, the hoops, all the rest of it. My strapping I wear when I'm throwing.

"She looks pretty awesome if I do say so myself, she's quite amazing."

The mum-of-two saw the honour as a chance to celebrate diversity and what a role model looks like for a young girl in 2020. 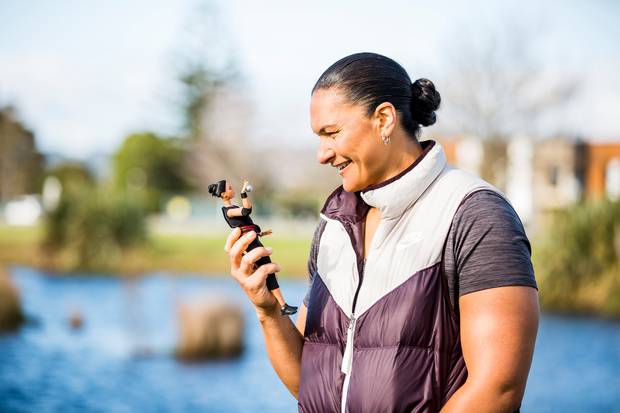 "It's a way that I can reach out to young girls here in New Zealand and the Pacific Islands.

"If they can see something that looks like them, it makes them feel normal - to be able to see something in their own likeness is quite exciting. I have a daughter and I have a responsibility to be a positive role model for her."

Her daughter, Kimoana, almost 3, has also never had her own Barbie, and now the first one she will own will be modelled on her mum.

"That for me is quite important because all of a sudden there's something that looks like her," Adams explains.

"It's even got my freckles which I'm quite excited about," Adams added, noting her excitement in sharing the experience with her daughter.

"I'm excited to share that moment with her. It's a good age to have a doll like that, so for me, it's perfect timing." "He's quite excited to see the doll."

And life shows no signs of slowing down for the three-time Olympic medallist, with training for the 2021 Olympics in Tokyo in full swing.

She's just come back from a four-week training camp in Hawke's Bay and hopes the Games will go ahead despite the global pandemic.

"Hopefully we'll have the opportunity to go overseas and start competing," Adams says.

"Everybody's in the same boat and we have to do our best to be the best we can be in the situation we're in.

"We can't control it but that's life."