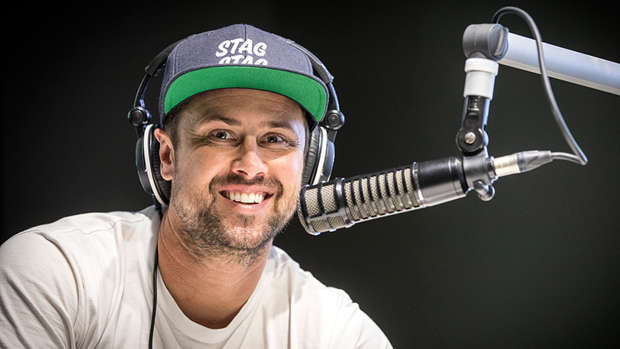 1. Growing up on Auckland's North Shore, what did you want to be?

I was sports mad. I wanted to be Michael Jordan but at 5'10" it was relatively unrealistic. I got a basketball scholarship to Westlake Boys' High and went on to play in the professional league for North Harbour. But I also loved performing - ever since I got paid $200 to spin a basketball on my finger for a Pizza Hut ad at age 11. I had bit parts in film and TV shows like Shortland St, Hercules and Power Rangers so when I graduated from Auckland University with a science degree I gave myself a year to give TV a real go.

2. You presented Sticky TV for eight years. What did you learn from children's TV?

I wouldn't be here today without the foundations I learnt in kids' TV. It's a wonderful model for creating content. Mary Phillips, the producer, was instrumental to my career. She gave us presenters licence to come up with our own segments and conceptualise them for TV, then she'd tear them to pieces and we'd learn.

I worked with some brilliantly talented people like Kanoa Lloyd and Drew Nemia and to this day people still recognise me from Sticky TV.

3. Why did you become a weather presenter?

It was kind of by accident. After leaving Sticky TV I had to start back at square one so I got a job in the TV3 newsroom as a general dogsbody, helping out where needed. Rachel Smalley needed someone to write the weather so I worked out how to use the WeatherScape computer system. That was very handy when TVNZ rang to offer me work on a new Saturday Breakfast show with Toni Street and Rawdon Christie which ended up being so successful we were promoted to weekdays.

4. How much do you back your forecasting ability?

When I started out I had a lot of help from the MetService but the more I did it, the more I trusted my own ability. My science degree gave me a head start and having spent six years forecasting how fronts will move over land masses and then going back and seeing how things played out, I really back my knowledge. The MetService claims 95 per cent accuracy, plus or minus two hours. Most times you'll get the weather systems, it's just when they arrive. I do feel personally responsible when I get it wrong. Jim Hickey still rings me from his cafe in Taranaki when I've got their report wrong. Or he'll text me: "Lovelystuff on the mountain bike today. What's your focus? Weather. That's right mate. Have a great day."

I've taught my body to survive on five hours' sleep a night. It drives my girlfriend mad. She gets up early and goes to the gym to try and get in synch with me. My favourite time of the day was between 3.30am and 5.30am, when I'm crunching the numbers from the MetService. It's so quiet and peaceful it's almost meditative. If I have an afternoon nap then I don't sleep as well at night, so I go to bed around 9pm. I work long hours - not because I have to but because that's where I'm happiest. I get bored on holidays. That work ethic comes from my parents, who started their own successful roofing company. I find that being fit helps me to cope. When I'm fit my house is clean, my diary's organised and everything falls into place.

6. What was your funniest moment on Breakfast TV?

I'm probably most famous for the "dick cloud" - that got picked up by the Daily Mail and CNN. The photo was actually taken by Barbara Kendall who put it on twitter and I found a retweet. I never actually said the cloud looked like a dick, I just asked if there was anything to see in it, so I didn't get trouble. 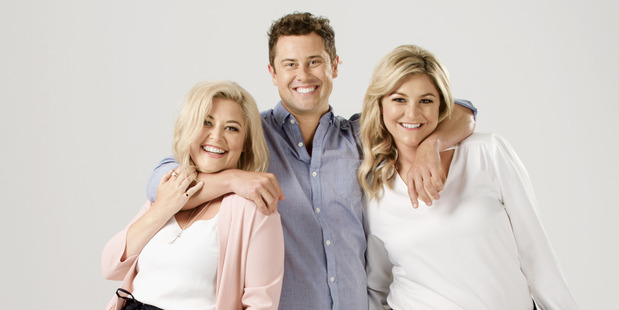 7. Did you ever cross the line at TVNZ and get called into the boss' office?

Copious amounts of times. They're pretty reasonable though. They explain how you got yourself into the pickle and how to avoid doing it again. I always get picked up for everyday sexism. For example you can't say someone "throws like a girl". It drives me mad. I don't think I'm sexist. Most women weren't offended by that. No one wants to watch a show where you're walking on egg shells trying not to offend anyone. That's why Hosking and Henry are so good ... because they say it like it is. And the fact is; some girls do throw like girls. One good thing about Breakfast was that after listening to the audience's responses I'd have a chance to take back what I said. It was a conversation.

8. You worked with Toni Street in TV and now radio. What's she like to work with?

When I first met Toni in the lift at TVNZ and she was so nice to me I thought, "Oh my God, this chick is so fake. She can't be that nice." But she actually is that nice. We've been really close friends ever since then. We spent six years working at TVNZ together and a year ago were offered the chance to co-host The Hits' new Saturday morning radio show - which we couldn't turn down. It's been such a success that we've been promoted to weekdays in the Auckland market.

9. How did you meet your girlfriend Sarah?

She's Toni Street's friend. We met at the Auckland Cup race day. I think we'd drunk as much as each other. She comes from a farm and is pretty solid. She's not a socialite or in the game which is cool. We've been together for five years and own a house together. Lately we've been getting a lot of pressure to marry. I would like to have children one day but I'm only 35.

10. Did you enjoy discovering your genetic heritage in the TV show DNA Detectives?

It was one of the best things I've ever done. I did a blood test and then they flew me to Europe to show me my heritage. It turns out I'm related to Prince Phillip, who also has a problem with saying inappropriate things. I saw my family castle in Scotland where my ancestors put people in pots to force them to sign over their land. The most amazing part was meeting a 113-year-old relative from Sardinia. I get my dark skin tone from those Italian genes. They're a low percentage but they're pretty powerful.

I like to believe that you live on through the impression you leave with people - whether its laughter or fun. My first priority in any situation is always to have a giggle.

12. Do you miss doing the weather?

I will be doing the weather on One News at 6pm sometimes, filling in for Dan and Renee when needed. While the weather is an absolute passion I love telling stories that resonate with people. That's the ultimate reward.