Laura McGoldrick announced today that she and her cricket-star husband Martin Guptill have welcomed their second child.

Sharing the news on The Hits 3pm Pick Up, Laura excitedly told Hilary Barry and Estelle Clifford, "I finally got my baby boy – oh I’m going to cry – and he’s perfect!"

"He is the most spectacular thing, second [only] to my daughter that I have ever seen. I forgot how small babies are!"

Hilary noted that she was getting "choked up" hearing Laura’s amazing baby news, telling the new mum: "Oh my goodness we’re so, so, happy for you! It’s a relief too when they arrive safely."

After being asked to describe her precious new-born, Laura gushed about the infant’s "big feet", "blue eyes" and "dark hair". The proud mum also revealed how "sweet" her three-year-old daughter Harley has been with her new baby brother.

"His sister with him is so sweet," she explained. "I didn’t know what to expect. I guess when you just have one child for so long you have ideas about what it’s going to be like.

"She’s been the center of our universe for so long and [we thought] how are we going to divide that [time] but she’s been hilarious, she’s been so sweet with him." 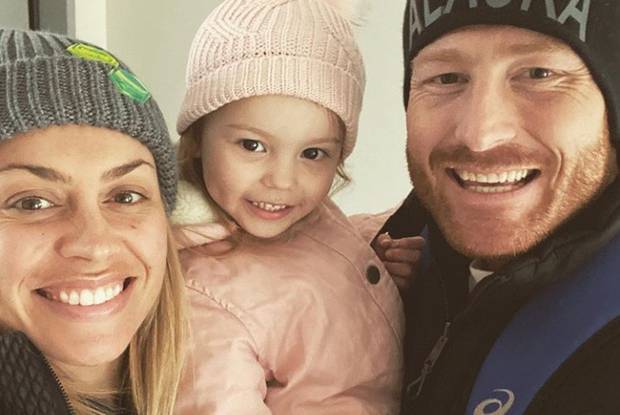 Laura also told Hilary and Estelle that there has been a quick turnaround since she gave birth as her sports star husband has had to travel down to Christchurch to play in the T20 cricket series.

"I’m learning how to be a mum of two very fast," Laura said.

"I think I’m just delirious and tired. It’s quite unreal, I can’t quite believe that it’s all happened so fast and he’s just beautiful, he smells so great. I feel so lucky.

In September last year, Laura announced that she was pregnant with Teddy and also opened up about her previous fertility struggles and heartbreak.

"For us, like a lot of couples, it hasn't been as simple as falling pregnant," she said at the time.

"I know a lot of people will hear this on the radio and their hearts will break, because I went through that this year."

McGoldrick revealed that after an easy pregnancy with Harley, she knows now "more than ever how lucky I was and am".

Congratulations on welcoming Teddy into your family Laura and Martin!