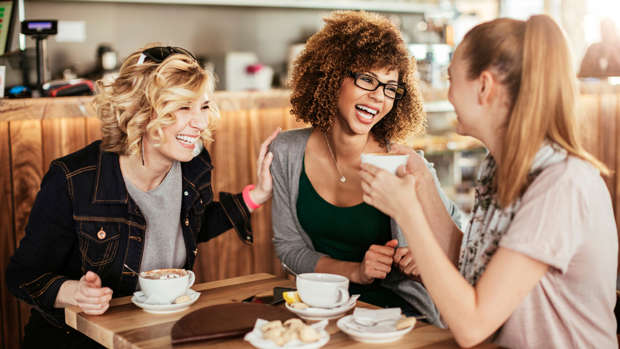 The art of persuasion ... Some of us seem to naturally know how to ask and receive what we want from others and for the rest us of us - it’s pretty hit and miss.

Researchers have been studying how to influence us to say "yes" to the requests of others for over 60 years. There is no doubt that there’s a science to how to persuade people, and a lot of the science is unexpected. Here are some tips to increase your influence on others to Jedi like abilities.

We will start with how to influence people you don’t know and then move on to persuading people you know already.

The number one thing you need to influence anyone, especially someone you've never met, is to create trust. We are constantly scanning every person we come across for friend or enemy signals without even consciously thinking about it. It’s hard-wired into our DNA as a safety mechanism to assess whether we can trust a new person or not.

There are straightforward body language messages you can give to help people instantly trust you and see you as a likeable person. This can also help you to realise how you come across to other people. You may be sending unfriendly messages to others without even realising it. People initially judge you more based on your body language than what you have to say, and some of us are conveying signals that we are untrustworthy without even realising it.

The eyebrow flash is a quick less than a second raising and lowering of the eyebrows. Within 2 meters or less proximity of meeting any new person, we look for and give the signal to people to convey the message that we are not a threat. If we give an eyebrow flash to someone and they don't reciprocate, we may instantly feel uncomfortable or rejected without even knowing why.

If you are interested in meeting or approaching someone, try sending them an eyebrow flash and see if they send one back. If they do, they are open to further contact with you, if not, I would move on, as they are probably not receptive to further interaction. Make sure your eyebrow movement is very quick, raising your eyebrows for longer periods of time and staring comes off as aggressive and creepy.

Tilting your head to the right or left is another way of conveying that you trust the other person and are open to interaction. Tilting your head either side exposes your carotid artery on either side of your neck and shows that you do not pose any threat. People who tilt their heads perceived by others as more attractive and trustworthy. When you tilt your head towards the person you're talking to, you are seen as more friendly, honest and kind compared to people who keep their heads upright when they talk.

If you want to present yourself is more dominant in a business situation, keep your head upright. However, if you are looking to connect with someone and be seen as trustworthy, make a conscious effort to tilt your head.

When you smile, you are perceived more attractive, confident, trustworthy, friendly and accepting than when you're not. When you smile at others, this conveys acceptance and friendliness which makes the other person feel good about themselves and triggers them to smile back. You want to make sure it is a genuine smile that reaches your eyes - as a fake smile can be perceived as unfriendly and untrustworthy.

When you mirror or copy the body language of the person you're interacting with, for instance crossing your arms, legs, holding your hands in the same position as the person you are talking to, this conveys trust and connection. Mirroring is what people do subconsciously without even realizing it when they like someone. When someone does not mirror another person they are interacting with, the person not being mirrored will subconsciously take this as an unfriendly response and feel uncomfortable with that person even though they may not realize why.

Seeing someone’s hands is hardwired into our DNA in deciding whether or not we trust them. Think about what the first thing a cop says when they pull someone over. “Put your hands where I can see them!” Putting your hands behind your back or in your pockets kills the creation of trust and connection when meeting someone new. A good way to break the habit, is every time you put your hands in your pockets when meeting new people, say in your head “Psycho killer!”

How to influence people you have already met

Ask for a favour (as well as give favours)

Now I know this sounds counterintuitive, but when you ask someone for a favour, and they are able to do it, makes them feel good about themselves. This also opens up an opportunity for you to do favours for them, which opens the door for them to feel like they owe you something and more likely to say yes to your requests. One of the most powerful tools of influence there is - is the rule of reciprocation. This rule applies in every society on earth.

The universal law of reciprocity says that we should try to repay whatever another person has given us. If someone does us a favour, we should do a favour in return. If someone buys us a birthday present, we should remember their birthday with a gift as well. If someone invites us to a party, we feel obliged to invite them to one of ours. The rule of reciprocation works not only in your personal life but business as well.

Being open with your feelings increases your likeability and influence. People will see you as being authentic when you admit to flaws and weaknesses. People find it easier to connect with you when you open up and are more likely to trust you and share their vulnerabilities as well which deepens the connection. When someone either refuses to be open with their vulnerabilities and direct with what they need help with, this causes others to instinctively resist helping them since the other person may feel like they're being manipulated.

The old saying flattery will get you everywhere definitely has an element of truth. Giving people compliments, as long as they are sincere, makes the receiver feel good as well as see the giver of the compliment in a more positive light. A compelling way of giving compliments is giving the person a compliment in front of them to others rather than to the person directly. This not only makes them feel good but also raises their social status in front of others.

This is a good technique to use on people like your boss, or others in a position of authority. Another way of achieving the same result without looking like you are trying to obviously suck up to the person is to compliment that person to others who you think would relay that information back to them.

Pick the biggest gossip you can find who talks to your target on a regular basis, or tell a group of people a positive story or compliment the person you're trying to influence. The information is bound to get back to them, and they are much more likely to accept the compliments without feeling like you are trying to obviously suck up to them.

The key to influencing people is to be a genuinely good person. If you try to influence people to manipulate them or cause them harm - it will backfire on you. Being a genuinely kind, empathetic and caring person is probably the most powerful influence of all, and they are the best traits you can cultivate to have people respond to you in the way you desire.

Caroline Cranshaw is a hypnotherapist, founder and trainer at the New Zealand Integrative Hypnotherapy Training Institute and the author of The Smoking Cure. Find out more about her at nzhypnotherapy.co.nz