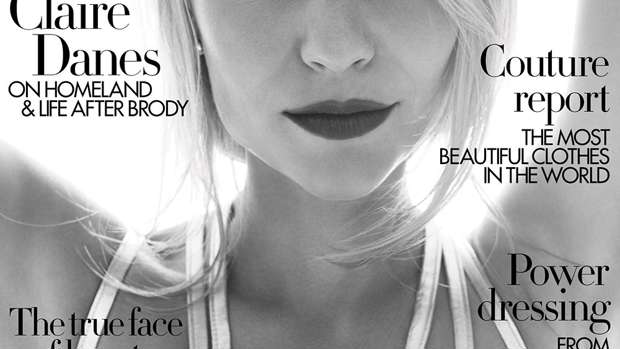 I’m midway through telling a friend about this amazing Harper’s Bazaar profile on Claire Danes.   Actually, I’m gushing – swooning even –  profiles NEVER go this  way. Not profiles about working mums.

It starts off kind of normal. Claire Danes and Ajesh Patalay  (the journalist) rendezvous at a swish New York restaurant,  but there’s no sophisticated entrance. Danes arrives late, flushed and  described by turns as ‘distressed’ and ‘confused’ – madly punching stuff into  her iPhone – her face animated with contortion. They sit down. But instead  of ordering a martini, Danes ‘dashes apologetically’ to the bathroom, only to  return – even LESS composed – before launching into this ‘life update’:

“But yeah, we are off in two days,’ she says, meaning her actor husband Hugh  Dancy and their 17-month-old son Cyrus, both of whom are leaving with her for  Cape Town, where the new series of Homeland is being shot. ‘So it’s just kind of manically trying to – interesting choice of words – but  no, [we’re] desperately trying to get all of our gear together and it seems a  lot right now. Hugh is actually taking a job, a mini-series about Gallipoli five  days into our [stay], so he will fly with us and then five days later go to  Adelaide for a month and then come back for two weeks and then [off] for another  month, so… We have a brand new nanny too, who we will basically meet at the  airport, so it’s all just, you know…’

Yeah Claire, I basically want to yell. I know EXACTLY what you are talking  about.  I really do.

Because what you’re really saying – behind all that  glamorous/Hollywood/nanny/jet-setting lifestyle stuff – is the truest thing  there is for me right now. And here it is: This working motherhood thing – it’s a killer. Really, really tough. More physically demanding, more mentally  exhausting and more undeniably challenging than clearly, many of us – even  Hollywood types like you – ever, ever expected.

But my friend stops me mid-sentence.

“Hang on a sec, Lucy? What do you mean you didn’t know being a mum would be  hard work? Didn’t you expect to be carting a baby around all day, that they’d  need you 24/7. That there’d be days you’ll be working on zero hours sleep  without a shower. How could you not have known that?”

I feel taken aback and start hunting around for a ‘good’ answer.

The real answer is a big fat ‘no’.

I had no idea whatsoever what being a working mum was like. Everything I  thought I knew came from books that I’d read or advice I’d been given. The rest  of it, I just imagined.

Books depict working motherhood in deceptively manageable terms. After all,  routines, sleep schedules and long paragraphs about the impact of hormones and  sleep deprivation – they’re easy to ‘write’ about. Living those things, well  that’s a completely different story altogether.

For example, until very recently I did not know that my brain can fire up OK  in the morning after about five hours sleep, but it’s going to shut down by  1pm. Or that speaking in front of a room full of friendly adults  could be again so terrifying I’d end up repeatedly tongue-tied  and ashamed.

Same goes for the endless, well-meaning anecdotes other mothers share  with you, of ‘easy’ or ‘difficult’ babies, and constant reminders that things “will get easier.” I’ve said those things myself. And they’re all  true. It’s just that how you ‘imagine’ it feels to be at work sleep  deprived or hormonal is based on pre-baby experiences. Not how it feels in the  afterglow.

Now I know that it’s possible to be up all night worrying about leaving your  baby with someone new. Then feel guilty when you spend the next day so busy you  barely thought of them. Or the panic on realising that despite missing your  baby all day, once you’re home, the housework has eaten up the time you should  have spent playing together.

It’s chaotic, a jumbled mess of conflicting feelings and priorities. And you  have very little – if any – time alone to really process it.

‘Being a mum is incredibly challenging,’ Danes agrees, ‘but we still feel a  pressure to talk about it in very romantic terms. And it’s not just that.  We all have that resentment at times and anxiety about being trapped  by the role, that responsibility. And then chemically it can run riot. Your  mental state, the hormonal swings are so extraordinary and singular to the  female experience and they haven’t been taken very seriously or considered very  deeply… I mean, post-partum aside, even if you have the most healthy  relationship with your child and have support and resources, it’s tough. It’s  really tough. And there’s no “off” button. [For me] that was the hardest  adjustment. You always feel beholden to somebody… And for so long they’re like  koala bears, you just feel a physical responsibility to be there for them to  cling to. It’s pretty primal.’

But also there is just SO much goodness in this new life.

As I told my friend (and anyone else who’ll listen), it’s impossible to  explain the sheer, joy, gratitude and love I have for my son and my new job  as his mum.

I covet him with every part of my heart and wish everyone the same extremes  of happiness, pride, gratitude and sheer terror that seems to co-exist in this  motherhood place.  Just don’t expect it to be easy.