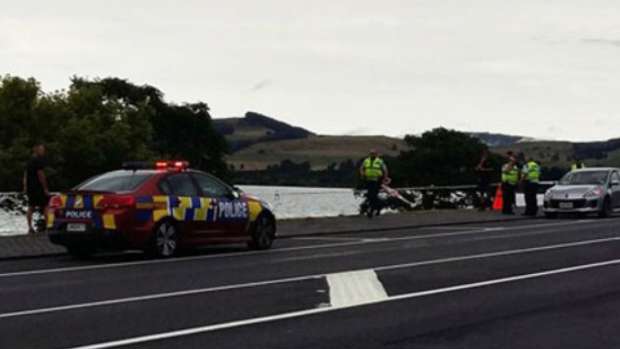 A 58-year-old woman has suffered critical injuries after being hit by a runaway trailer while walking along the Taupo lakefront around 8am today.

Taupo police said a truck towing the trailer, which was loaded with timber, was travelling south along Lake Terrace when the trailer detached. It careered across the road slamming into the pedestrian, who was walking on the lakeside footpath, before running down a bank and into the lake.

Passers by raised the alarm and rushed to the aid of the injured woman who was taken to Taupo Hospital with critical injuries.

A local man who witnessed the accident said it was a miracle no vehicles, or other pedestrians on the lakefront walkway, were injured.

The man, who didn't want to named, said he was a short distance away when he saw the trailer break away from the truck.

"If I had been 20m up the road the trailer would have gone straight through me. "If it had been a hot day it could have killed people who would probably have been on the reserve area by the lake," he said.

After hitting the woman, the trailer cut a clear path down a bank on the lakeside reserve into the lake - missing a number of trees and bench seats.

The accident happened on a straight stretch of road and police say investigations are underway to determine what happened. A police cordon remained in place this morning around a portion of the reserve area and a pile of timber floating just off the lake edge was the only other obvious sign of the incident.

Police expected the trailer to be recovered from the lake later today.