Fashion trends are always changing, and so is the line of what is appropriate to attire for work.

Stace and Flynny posed the question of whether or not a particular outfit – a woman wearing knee-high boots and black mini skirt - was acceptable while on the job and it sparked a huge debate that had people divided. 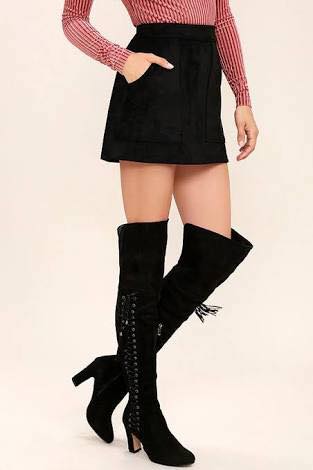 "I wore this outfit to work on Monday … but better," in the comments on Facebook.

"Yes! Men are allowed to wear what they like to work so why can’t women?" another added, saying that the outfit was fine.

"Sure if you feel good (might be a problem if you have to stretch or life things)" one commenter said, adding that it was a common look in the 70s.

"Yes if you’re prepared for google eyes," one woman commented, pointing out that they wear could end up with unwanted attention.

Meanwhile, a stream of Facebook commenters simply said "no", the ensemble wasn't appropriate at all.

One person even stated that the knee-high boots and mini skirt "looks a little like Pretty Woman".

While another added: "I think if you can see her vagina when she sits down, the skirt may be a tad too short!"

However, a lot of people agreed that it depended entirely on where you worked and your occupation.

In a poll on the Stace and Flynny Instagram, 35 per cent that it was appropriate, while 65 per cent said it wasn’t. Weighing in on the debate, stylist Laura King told the Daily Mail Australia that she believes the term 'smart casual' is one of the most "problematic dress codes".

"This should be renamed smarter rather than casual," she said, "Always dress on the smarter side and avoid soccer and footy tops and t-shirts with big logos.

"For women, denim is fine as long as you avoid the distressed look. If opting for a plain tee, throw on a blazer to ensure you tick the smart box as well as the casual.

Sports luxe is not smart casual and should be kept for casual Fridays and the weekend."

Meanwhile, Stace thinks women she should be able to "rock whatever you want".

"I’m not about making hard, fast rules, for especially knee-high boots," she said

"I totally agree," Flynny added, "people shouldn’t be able to make sexually charged comments about things that you wear in the work place."

"You may find that they’re knee high for some people, but for people like me, they’re neck high," Stace joked.