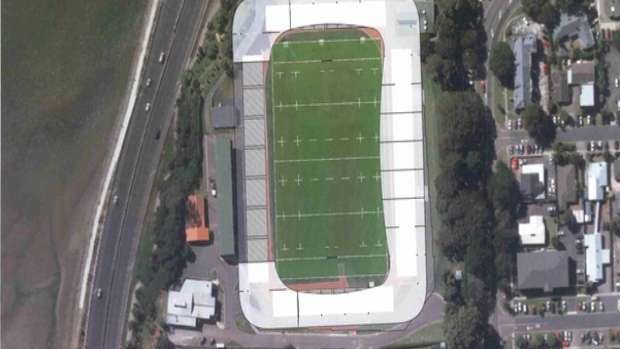 An artist's impression of what the proposed boutique sports stadium at Tauranga Domain could look like. Photo / Supplied

A proposal for a new boutique sports stadium at Tauranga Domain worth about $25 million has been presented to councillors by Tauranga's Civic Amenities Group.

The group's chairman, Paul Adams of Carrus Group, told the Bay of Plenty Times they had briefed Tauranga City Council on a package of proposed civic infrastructure projects, including the development of a stadium at the Domain with a capacity of about 15,000.

"The Civic Amenities Group has presented a proposal to the elected members and is looking forward to working collaboratively with Tauranga City Council in further costing, then developing, funding and construction of a boutique stadium, " he said.

"Discussions need to take place with the elected members on the funding of this project, which is part of a bigger strategy being proposed by the Civic Amenities Group."

The councillors were privately briefed last month on a raft of interlinked projects, including arts, cultural, museum, sport and leisure facilities.

"A stadium suitable for winter sports and summer events is part of a wider list of civic amenities that the fifth-largest city in New Zealand absolutely requires and deserves," said Mr Adams.

"It is up to the elected members to decide if they wish to positively support the proposal for a stadium and then move forward with delivering such an amenity. The Civic Amenities Group has offered to collaborate and support Tauranga City Council if it makes a decision to move on this project, by providing the significant knowledge base, financial experience and resources required to make it a reality."

Discussions would need to be held with other users of the Domain including the athletics club, he said.

Mayor Stuart Crosby said he supported the proposal for a stadium to be used for sports and other events.

"I think a city of our size needs an upgrade of the Tauranga Domain. I think the Domain is the location as a result of the Anzac service and the Steamers game held there."

He also backed the size of the proposed stadium put forward by the Civic Amenities Group.

"It's not a big project. It's a sensible upgrade for a city of our size," he said.

Mr Crosby said the next step would be to invite the Civic Amenities Group to present the proposal in a public council meeting.

If there was sufficient interest and support it would go through the annual plan so it could be budgeted for, he said.

Bay of Plenty Rugby union chief executive Mike Rogers said the recent Steamers game held at the Domain showed being so close to town added to the experience and atmosphere as well as being good for businesses in Tauranga CBD.

"We are a growing population so to attract the big events we've just got to have the facilities to support that," he said.

"I think it's great that we've got some of our key business leaders working with the elected members to do something that could really benefit our city.

"From a sports point of view, it's an exciting opportunity for the city."

Mr Rogers said a stadium at the Domain would allow Baypark to be used specifically for speedway events, which was what it was built for, rather than juggling motorsport and rugby.

An outdoor sports stadium that could also be used for concerts and other events made sense for the Domain, he said.

"What I've heard generally from elected council members and staff is there's a real willingness to work with Civic Amenities Group.

"We strongly support the Civic Amenities Group projects in general and the stadium in particular. From a Priority One perspective, a stadium is a coming-of-age piece of infrastructure that helps build the vibrancy that makes Tauranga attractive." Paul Adams - the instigator and chairman of the Civic Amenities Group (CAG) - said its members had consulted within the business community, including Priority One and the Tauranga Chamber of Commerce, the Bay of Plenty Rugby Union, sports clubs, and many ratepayers.

"We believe the time has arrived where we need to push on in truly turning Tauranga into the best city in New Zealand, balancing growth and natural assets with the required civic amenities, including a central business district stadium."

Smaller cities such as New Plymouth and Napier which lacked Tauranga's natural attributes had left the city in its wake, boasting fine sports stadiums, art galleries, museums and cultural centres, he said. "The time has arrived to ensure the TCC balances our growth, not only with the required core infrastructure, but also the amenities that ratepayers desire."

The CAG and its members were already involved in helping fund the new High Performance Sports Centre at Blake Park, which could help Tauranga become the home of elite sports in New Zealand.

"University of Waikato is very keen to become part of this exciting opportunity, which could well lead to sports sciences and management degrees being offered as part of our new Tauranga University Campus. The economic benefit and enhancement of Tauranga civic amenities is immense."