AFTER the internet exploded at the news the iPhone 6 could be unveiled on September 9 it’s time we took a look at what this new frenzy-whipping handset could be packing at the event.

Website Re/Code has accurately tipped off the world to previous Apple events and when they claimed “Apple has scheduled a big media event for Tuesday, Sept. 9” we all leapt to the conclusion the next-generation iPhone 6 is on its way. While Apple hasn’t officially confirmed this date (or sent anyone an invitation), the claim was backed up by the Wall Street Journal and Bloomberg, so we’re still pencilling a big circle on our calendars.

Rumours on what the new handsets will feature have been tossed around like a hot potato so what’s the latest definitely-maybe things to expect when Tim Cook shows off his latest creation?

• Unless you’ve been living in another galaxy (heh) we all know the new iPhone 6 will be bigger. There are two larger screen sizes — 4.7-inch and 5.5-inch — on the way and both are likely to be announced but it’s believed the 4.7-inch will be available first with the 5.5-inch coming at the end of 2014 or early 2015. It’s not like Apple to announce a product you won’t be able to buy till next year so we’re still unsure how they’ll play this one with the reported production delays putting a literal spanner in the works.

With this increase in screen size we could be looking at an increase in screen resolution too. While there is the worry all these extra pixels could mean battery life might not increase (even with a larger battery), the stunning new display will be worth it.

• As well as being larger, the new handsets will be rounder and thinner. It’s a natural evolution of the iPhone to get thinner but the radical redesign everyone is craving could come by way of a rounder, lighter, aluminium unibody chassis that’s more like the current iPod Touch. That’s if any of the leaked photos are to be believed.

• You can’t have a new iPhone launch without some lovely new power under the hood. With all that extra chassis size there’s room for the bigger, more powerful A8 processor that powers its iPads. As well as extra power there is the expectation we’ll see more memory options, with a 128GB model in the rumour mill. With the iPad Mini already offering this memory size and the way apps are getting larger we would be inclined to think this could happen.

• The 8-megapixel camera has been ever-so tweaked over the years but rival handsets (Sony Xperia Z1 and Nokia’s Lumia 1520) have really shot ahead for picture quality. With mobile photography being so important to consumers the idea of seeing a bigger sensor and better optics (maybe 13-megapixels) is worth putting a punt on.

• One rumoured feature that’s had bloggers scrapping like schoolboys is the notion of the iPhone 6 coming with a scratch-resistant sapphire display. Doubt has been cast but we’d welcome a smash-proof screen. 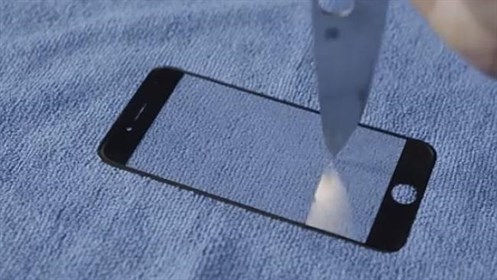 • Apple has already revealed iOS8 so it’s just waiting for devices to move into.
When September rolls around we will see how the new operating system will work
with the iPhone 6 and all the snazzy features you have read about in-action.
Expect lots of HealthBook, fitnessy stuff here as well as some update on what
Beats and Apple have been concocting. Apart from the star attraction of the iPhone 6, will Apple take the opportunity to flaunt a few new other devices?

If you’re thinking iWatch, you’re as hopeful as us. If Apple does roll-up their sleeve to show off the much anticipated smartwatch we’d be very surprised as they have done an unprecedented job at stopping any leaks or rumours. Perhaps unveiling a new iPhone plus an iWatch might prove a bit too much here. Most believe we’ll see another Apple event come October so watch out!