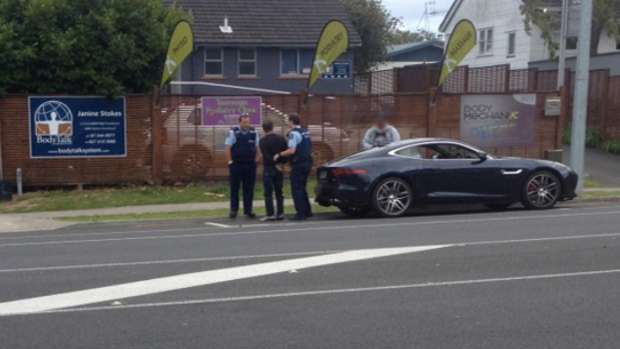 Find a vid of Rudd being taken in to custody here:

An eyewitness to an altercation involving AC/DC drummer Phil Rudd before his arrest for breaching his bail yesterday says the rocker was warned: "Back up. I don't want to break your face."

The warning came from a man who wound up in a confrontation with Rudd yesterday, according to Leo Rojas, 26, owner of Columbus Coffee cafe in Gate Pa Tauranga.

Mr Rojas was drawn outside his cafe by sounds of a fracas.

He said he was confronted the sight of an altercation between Rudd, who he did not immediately recognise, and a much larger man who was almost 2m tall.

Mr Rojas initially tried to separate the pair, then fell back, at which point the warning was issued.

"The big guy lost his cool. He pushed Phil really strongly. Phil fell to the floor."

While the larger man tried to make it to his car, Mr Rojas said the altercation continued. "Then the big guy pushed him to the floor again.

"Phil shouted out, 'that's why you don't work with the mafia'. It was weird," he said.

"The big guy is saying, 'Phil, get out of my way. That's why I don't work for you anymore.'

Mr Rojas said Rudd's bodyguard then tried to hold his employer back to allow the larger man to get to his car.

The confrontation with the larger man was aggressive but no punches were thrown.

He said he believed Rudd had been in a neighbouring bakery and bumped into the man, who had stopped at a table outside the cafe to ask a patron for something.

A staff member sent back to the cafe called police, who handcuffed Rudd outside Tauranga Girls' College, about 10.30am yesterday, a few minutes' walk away.

"He was out and bloody dancing around and carrying on and was arrested and led back to the cop car and was driven away."

Mr Carson said it seemed like one car had been chasing the other.

Rudd was arrested but no charges were laid in connection with the incident.

The altercation resulted in Rudd appearing in Tauranga District Court yesterday afternoon on a breach of his bail conditions.

Rudd, 60, who plans to defend charges of threatening to kill, and possession of cannabis and methamphetamine, acknowledged the breach through his lawyer Craig Tuck.

Mr Tuck told Judge Paul Geoghegan that Rudd acknowledged he had breached his bail and asked that he bailed again with agreed tighter conditions.

Crown solicitor Greg Hollister-Jones said this was "a serious breach" and urged the breach to be noted on the court record.

Judge Geoghegan agreed that was appropriate, and extended Rudd's bail conditions. Rudd is due back in court on February 10 for a case review hearing.

Outside court, Rudd quickly made his way to a dark blue F-Type jaguar driven by a male associate, and when asked to comment on the breach he mumbled something to waiting media which was incomprehensible.