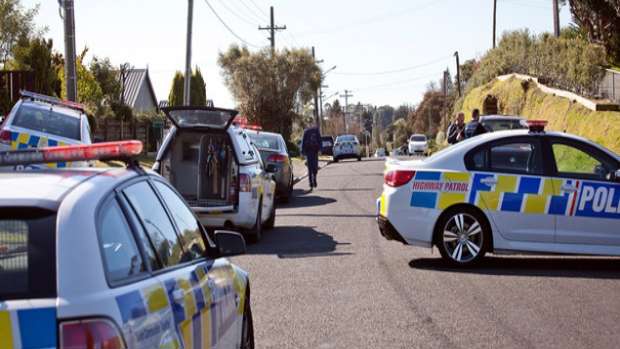 Police have confirmed a 23-year-old man was stabbed with a knife in the shoulder and abdomen in a Greerton home today.

Police alleged he was stabbed by a 22-year-old man, known to the victim, who will appear in the Tauranga District Court on Friday, August 14 charged with serious assault.

Police were called to the address and told that both men were still there, the victim lying in the driveway and a 2-year-old child in the house with the alleged offender.

The alleged offender was known to the child.

When police arrived, the victim was taken to a waiting ambulance and taken to hospital with moderate to serious injuries. He remains in Tauranga Hospital.

The 2-year-old child appeared at a doorway and was taken to her mother, who was at the police cordon.

Police entered the house looking for the offender, but the house was empty.

The alleged offender was soon found at a nearby house and taken into custody.

HOW IT UNFOLDED:
- A large number of police were called to Merivale shortly before 12.20pm.
- Police Inspector Barry Smally said police were responding to an ambulance incident, where it appeared an assault had taken place.
- Mansels Rd and Yatton Rd have been cordoned off by a police.
- One person was taken away in an ambulance
- Police swarmed a property
- Neighbours were told to stay indoors and police told one resident there had been a stabbing
- Police were negotiating with a person inside the house
- Police entered the house
- Police entered a second house, also on Mansels St 2.30pm: Police are packing up and leaving the scene.

2.03pm: Police have entered a second house on Mansels Rd.

1.39pm: Police have now entered the house where a stabbing is understood to have taken place in Merivale this afternoon.

Police dogs are also searching the house and neighbouring properties.

1.27pm: Police are negotiating with a person inside a Merivale house where a stabbing is understood to have taken place this afternoon.

A reporter at the scene on Mansels Rd said police are calling out to a person inside the property, telling them the house is surrounded by police and to come out the back door.

Police have also told the person inside 'you will be safe, we are not going to leave until we have spoken to you'. The reporter said a group of about five or six officers dressed with black vests looked as thought they were about to enter the property with large 'storming' sheilds.

1.16pm: More police have arrived at the scene where a stabbing is understood to have taken place in Merivale this afternoon.

A reporter at the scene said a car load of police officers dressed in black vests have arrived, joining an already heavy presence in the area.

1.01pm: Merivale residents have been told by police to stay within their homes as armed officers surround a Mansels Rd property.

A reporter at the scene said more police have arrived at the property, where they initially responded to reports of an assault.

Police have told resident it was a stabbing.

12.46pm: Armed police have surrounded a Merivale property asking a person to come out of the house.

A Tauranga police spokeswoman has confirmed officers are dealing with reports of an assault at a Merivale property.

12.36pm: A man has been taken from a property on Mansels Rd in the Merivale and Greerton area and put into a ambulance.

A reporter at the scene said a man was taken from a residence by police and put into an ambulance.

The reporter said Mansels Rd and Yatton Rd has been blocked off and about five police units are present as well as an ambulance.

EARLIER: Reports are coming in of a heavy police presence in Greerton this afternoon.

A spokeswoman for Tauranga station said there was no incident to report, however northern police communications shift manager Barry Smally said police are responding to an ambulance incident.

My Smally said it appeared an assault had taken place.