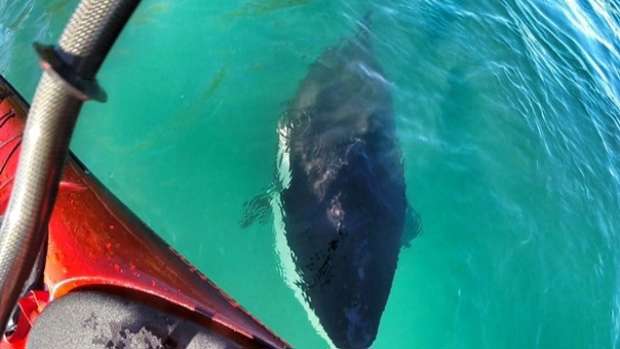 Nathan Pettigrew was kayaking toward Pilot Bay yesterday when a pod of orcas swam towards him.

The pod had been hunting stingrays in Tauranga Harbour before heading back out to sea.

Mr Pettigrew had been testing a new kayak around Mauao when he saw the pod.

"I was picking up some speed and I was riding back and some big dorsal fins were coming straight towards me. One of the orcas appears below the kayak. PHOTO: Nathan Pettigrew

Mr Pettigrew said it was a completely new experience each time he saw the creatures.

"Orcas are so incredibly fascinating and every interaction is different. Like this little guy who came up to my kayak - at one stage I was actually paddling away and the orca ... followed me. He was swimming upside down underneath my kayak."

The 40-year-old said he was able to identify some of large males in the group. Orca are known as the wolves of the sea. PHOTO: Nathan Pettigrew

"One of them is named Funky Monkey and he is a true harbour-hunter. He is a real specialist at coming into very, very shallow water to feed on the rays and, what I mean by that, is he actually comes into the Welcome Bay estuary.

"He was with another one called Pickles. He has a cut-off dorsal fin and I have kayaked with him on a number of occasions and he's like a little teenager. He's amped up, he's curious and he wants to know what's happening."

The mammals were named by well-known marine biologist Ingrid Visser who has spent much of her life studying them.

Mr Pettigrew said the pod was on the move throughout his encounter but he was able to spend about 20 minutes with them. Department of Conservation ranger, John Heaphy, said it was quite common to see them throughout the year. There were two or three pods of orcas who moved up and down the eastern side of the upper North Island and in the past six weeks this would have been the third or fourth time there had been orcas in the harbour, he said.

Mr Heaphy said sightings had been more common in the Bay but there were also more people around to witness their visits.

He advised people to keep their distance. "People might spook them and they could [become stranded]. They come right into the harbour, just off Fergusson Park, and will be hunting stingrays."

Stingrays were one of the preferred foods for the orcas who visited this area, he said.

'The wolves of the sea'

* There are estimated to be fewer than 200 orcas (Orcinas orca) living in New Zealand waters.

* They are often seen in coastal waters.

* Despite the fact they are predators of large marine mammals as well as fish, they have never been recorded attacking humans in the wild.

* Orcas are also known as "killer whales", but they are not true whales. They belong to the dolphin family (Delphinidae), of which they are the largest member.

* Males have a distinctive erect dorsal fin up to 1.8m tall, whereas the fin of females is shorter (about 0.9m) and more curved