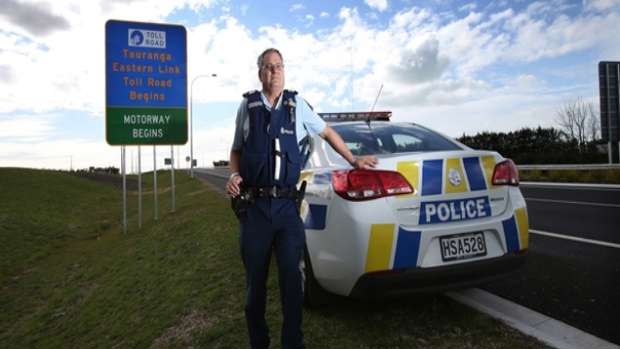 Police say they will be cracking down on drivers breaking the speed limit on the newly opened Tauranga Eastern Link.

At least 20 motorists were caught speeding last week, which includes a dozen the day the new highway opened and another seven over the weekend.

Acting head of Western Bay road policing Sergeant Wayne Hunter said one car was clocked at 139km/h and a motorcyclist was travelling at 135km/h.

Most were caught speeding during daylight hours, the police chief said.

"That's also concerning because there's more traffic using the TEL during the day than at night."

Mr Hunter said motorists hurtling along at those speeds risked serious injury or death. Innocent people driving in the next lane were also being put at risk.

"We have already had 15 road deaths this year and only need one more to equal the total road toll for the whole of last year."

The 139km/h speedster copped a $500 fine and 50 demerit points - anyone who accumulates 100 demerit in two years loses their licence for three months.

He urged anyone who had cruise control in their vehicle to use it on the stretch of road.

"Anyone pinged going more than 40km/h over the speed limit automatically loses their licence for 28 days, as well as demerit points and a large fine," Mr Hunter said.

The chances of being clocked speeding increased this week as mobile speed cameras had been added to the police's enforcement tools.

Mr Hunter said the cameras were being used between Baypark and Papamoa Domain roundabout and, depending on the results, police could widen the area and use the cameras more often.

"This is not about revenue gathering it's a safety issue," he said.

Mr Hunter said the number caught speeding was lower than police had expected.

"That's because we are actively enforcing the speed limit.

"If we weren't out there I'm sure people's speeds would start to creep up and a lot more people would be speeding."

"It's such an amazing, straight stretch of road and people are probably still getting used to it.

"But clearly people need to ensure they make a conscious decision to stay within the speed limit."

A NZ Transport Agency spokesman said an average of 6547 vehicles were using the TEL a day, with 45,830 using it in the first week from August 3 to 9.

The daily usage was above the forecasted total of 6000 vehicles a day, he said.