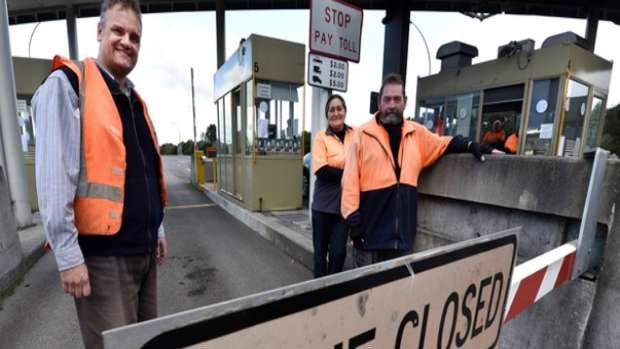 A packet of personalised tissues sits at each toll booth desk on Route K for the 16 staff members losing their jobs this week.

Boxes of chocolates, gifts, cards and even Lotto tickets have stacked up behind them from the locals who will miss their smiling faces twice a day.

For the people who use the road daily and for the 16 people who man the booths, midnight tonight marks the "end of an era".

When the final two employees finish their shift at midnight, the rest of their work "family" will be there to cheer them out.

Ivan Hamilton started working at the toll booths in 2007 and said his redundancy would probably prompt his retirement - as would be the case for a number of his workmates.

Tears welled up in Arihia Steward's eyes as she talked about her last shift on Wednesday, after nine years with her "work family".

"It's a sad week for everyone," she said.

She stood and divided up the treats they had received, with a named Snaplock bag for each employee and a photocopy of the hopeful Lotto ticket.

Over the years she got to know a lot of the faces that drove through twice a day and one woman in particular was hard to say goodbye to.

"I got teary with her when I told her it was my last day. I said, 'I watched your little ones grow up'. She said, 'You've been like an aunty to my children'."

The booths had been decorated with sad faces and the barrier arms were covered in the message, "Thank you, Bye", thanks to chief decorator Raewyn Elshaw, who was also responsible for the thoughtful packets of tissues. Manager Todd Hitchcock said they were blown away and humbled by the gifts they were given, with their noticeboard covered top to bottom in handwritten cards.

"A lot of people are sad to see us go.

"We're the first point of contact when people go to work in the morning and when they go home at night. Come midnight, it's an end of an era."

Two smiling faces had been in the toll booth windows every minute of every day, for the 5000-6000 cars which came through daily, since the road opened in July 2003.

Throughout those years, the staff had seen the best and worst of humanity - receiving thanks, copping abuse and hearing every excuse in the book. "There's so many stories. We've always said over the years that we should write a book," Mr Hitchcock laughed.

In any case where people were racing to the hospital for an emergency, the staff would let them through and pay their toll for them. Most memorable for Mrs Steward were the two pregnant women rushing to hospital in labour.

At midnight tonight, the final shift will end and the last two toll booth operators will walk back to the office, where the rest of the staff and some loyal customers will be waiting.