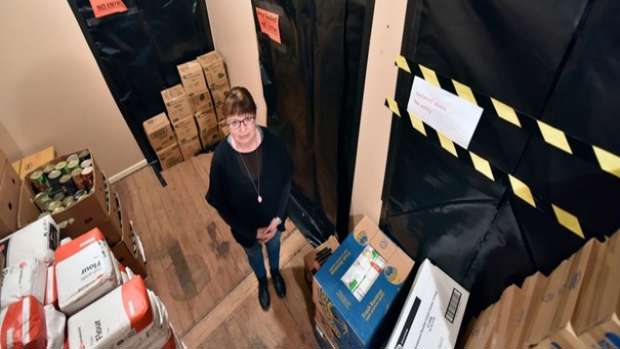 The Tauranga Community Foodbank may be forced to leave its Dive Cres building because of toxic black mould - the same mould that plagued the Tauranga City Council building last year.

Mould has already forced the closure of three of the storage rooms at the foodbank, with the organisation now struggling for space. The future of the council-owned building was uncertain but the council was working with the foodbank on relocation options.

They would be reaching their storage capacity with the annual school appeal next week.

"It's a difficult time for us," she said.

"We'll need some off-site storage and unfortunately that will probably come with a cost". Foodbank chairman Alan Plunkett said the foodbank had been based in the Dive Cres building for 27 years but the building was now "past its use-by-date".

hey were waiting on a meeting with the council to hear their options.

"We think we'll have to leave," he said.

The council covered the rent so the foodbank could survive financially.

Finding an equally-ideal building would not be easy, Mr Plunkett said.

They would need a carpark and a bus stop nearby.

"We can't just close tomorrow and say there's no more foodbank. It doesn't work like that, there's too much demand," he said.

Christine Jones at the Tauranga City Council confirmed a part of the building tested positive for stachybotrys, or black mould, and was completely sealed off.

"Surface mould was also found in two storage areas. The mould in these areas are not the potentially toxic type. Contractors have cleaned the walls and ceiling in one storage area to remove the mould; however, the ceiling linings in the second storage area are in very poor condition and could not be cleaned, so this area has also been sealed."

Mayor Stuart Crosby said the Foodbank's existing building also needed earthquake strengthening and had an asbestos fibre roof which, although not a danger yet, could become hazardous if disturbed.

He said there was a council-owned site next door to the ex-Royal Navalman's Hall at the bottom of Elizabeth St but it had the disadvantage of not being near a bus stop.

Mr Crosby said the council was looking for a site that ticked all the boxes. If it was unable to find a council-owned building then the foodbank might have to consider paying rent to a private landlord, he said.

"If we find a site suitable to them, then we can talk about the transfer."

Meanwhile, the future of the council's administration building in Willow St had also to be decided - eight months after the building tested positive for black mould.

Ms Jones said a dedicated project team, led by a steering committee, was assessing the future of the building and would be looking at accommodation options. " ... As well as identifying and assessing other opportunities. These opportunities are not yet defined but may include consideration of public space, public amenities, carparking and so on."

The carpet had been removed in the affected areas and surrounding surfaces including chairs, floors and furniture thoroughly cleaned in order to remove any spores released during the carpet removal process.

The council would consider a report on the civic block on August 25.

Stachybotrys and other toxic moulds often grow only inside wall cavities. When the mould is contained in a sealed environment, it is not a threat to occupants. However, if the mould spreads to walls and floors and is visible, or if wall cavities are opened, the spores can be released.

Some moulds can produce adverse health effects such as allergies, aggravation of respiratory problems, eye and skin irritation, headaches, nausea and flu-like symptoms.

- Ministry of Business, Innovation and Employment