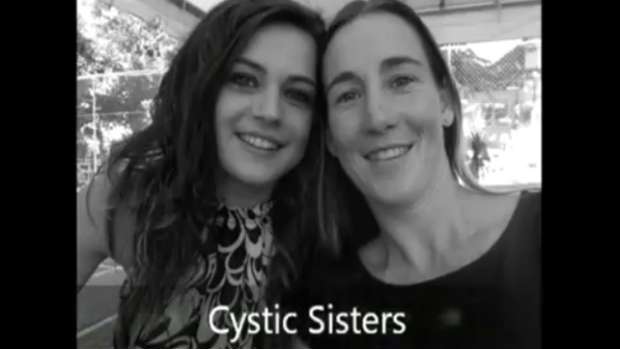 VIDEO OF THE SISTER HERE

Tired emergency workers have tucked into their home baking and they've shouted kids on train rides around the park.

One McDonald's customer pulled up to the drive-thru window to be told the nice women ahead of them had already paid for the meal.

Meet Tauranga's so-called Cystic Sisters - two big-hearted siblings whose response to a crippling genetic condition has been treating those around them to random acts of kindness.

All that Kristie Purton, 31, and Nikki Reynolds-Wilson, 24, have ever expected in return is for recipients to take just a moment to hear about cystic fibrosis, which has robbed them of a long life and their lungs of full functionality, leaving them to breathe as one would through a straw.

The sisters, who weren't expected to live past 18, have spent the past 60 days carefully choosing colourful deeds to help others and spreading the message ahead of the Cystic Fibrosis Association of New Zealand's national awareness week, which kicks off today.

Their 65 days of deeds acknowledge the way younger children pronounce the condition - "65 roses".

"There are so many people out there going through tough times as well, so we just think everyone deserves something nice," Mrs Purton said.

"We thought we could do these little things for them, but also let them know what cystic fibrosis is, because not many people do."

The usual response from their shocked recipients was, unsurprisingly, to ask why people weren't giving to them instead.

"But we've had a lot of support from our family, which lets us think a lot more about other people and doing the odd courteous gesture - and sometimes it's just letting someone in the queue go ahead of you or giving them your parking space," Mrs Purton said.

"You really do get quite a nice feeling out of it and you just want to do it more."

Even after their effort officially winds up at the end of this week - at the same time local branches of the association will hold street appeals around the country - they don't plan to give up on giving.

Meanwhile, their lives continue to be tough - both have lungs working at just 30 per cent of what they should be, meaning they're constantly sick and often struggle with simple tasks.

In the face of shortened life expectancy, the sisters are spending as much time as they can with their young children, and Mrs Reynolds-Wilson hopes an eventual lung transplant will buy her a little more time.

The national association's chairwoman, Jane Drumm, said the pair had been doing an "amazing job", but many people still didn't appreciate how the disease affected the more than 450 New Zealanders who suffered from it.

What is cystic fibrosis?

• Cystic fibrosis (CF) is an inherited genetic condition which stops the lungs working properly.
• To be affected by CF, a child must inherit a CF gene from each parent.
• CF is the most common genetic condition in New Zealand, affecting one in every 3500 births.
• It occurs mostly in Caucasian people, and rarely in Africans, Asians and Polynesians.
• There are more than 500 children and adults living with CF in New Zealand.
How to help
• To follow Kristie and Nikki's 65 days of good deeds, head to: facebook.com/cysticsisters.
• To donate to their Givealittlepage head to: givealittle.co.nz/cause/65daysofgooddeedsforcysticfibrosis.
• To support the Cystic Fibrosis Association of New Zealand's national awareness week, visit cfnz.org.nz.