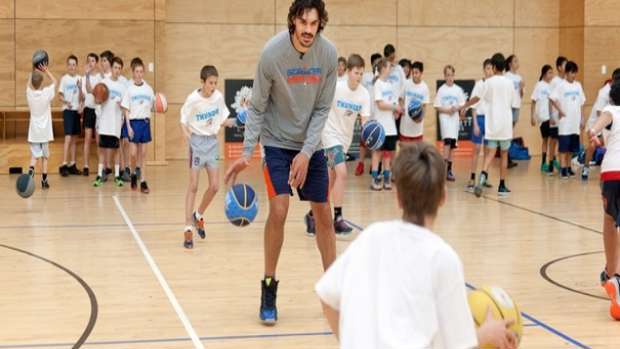 More than 300 children had the experience of a lifetime shooting hoops next to Kiwi NBA basketball star Steven Adams in Mount Maunganui at the weekend.

Mr Adams, 22, said the purpose of the training camp was to focus on the development of children "on and off the court". "[I want to see] kids coming through, getting basketball scholarships, getting a free education and getting a degree. I just want all that for New Zealand." Mr Adams said.

"If kids want to play I want to help them take it to their full potential."

The training camps, which were organised by NZ Basketball Academy and Basketball Pathways, would also be held in Wellington and Nelson.

"It's just a bit of fun day to build up a fun environment and show [children] where putting your mind to basketball can get you."

He said he looked forward to representing his country again as a Tall Black "when the time is right".

"For my own reasons, I can't play right now but I will be playing some time in the near future," Mr Adams said.

Mr Adams, originally from Rotorua, took the trip back home with some Oklahoma City Thunder officials, including assistant coaches Mark Bryant and David Bliss, as well as the team's general manager, Sam Presti.

Mr Presti said the camps were just as important to the team as it was to Mr Adams.

"Steven does so much for us as an organisation and he does a lot for our community in Oklahoma City," Mr Presti told the Bay of Plenty Times.

"I think it's important to support his efforts in his community and get to know the people down here."

"Anything that benefits the Thunder is secondary to really supporting Steven, I think that's the number one thing."

"I really respect what Steven is trying to do here, it means a lot to him."

Children from Waikato, Auckland, Rotorua and Napier made the trip to the Bay to spend a Saturday with one of their heroes. Basketball Pathways chairman Spencer Webster said the event was to "create pathways in life for children through basketball".

"While the camps are about basketball skills, the broader plan is to provide opportunities for our kids through basketball," Mr Webster said.

For most, the opportunity to sign an NBA contract is a high bar to grasp but the chance of an overseas basketball scholarship could be next in reach.

"If they're able to get a scholarship into a US college, to get a first-class education for free then that's a positive for them and their whanau and for society," Mr Webster said.