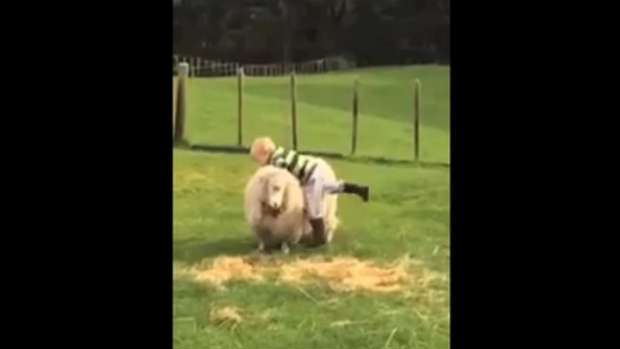 A video of two Tauranga boys trying to ride their pet sheep has gone viral with millions of viewers enjoying their antics.

The massive reaction has stunned Sally and Phillip Steiner whose sons Oliver, 3, pictured, and James, 7, have become internet celebrities.

And it all started when Mrs Steiner heard screaming and laughing out on the paddocks of their Belk Rd farm. When the boys came inside she discovered they had been riding Dotty and Sinead.

The two boys were at it again the next day, this time with mum watching. After watching an hilarious escapade where one of her sons fell off and was then chased by the sheep, she grabbed a camera.

It gathered at least three million views prompting BuzzFeed to write about it. It has been viewed more than five million times on TeenTimes and a couple of million on The LAD Bible. "I thought it was funny, but I did not expect the response it got, it's amazing," Mrs Steiner said.