SPOILER ALERT: This is about the episode of the show that screened Tuesday night, September 3.

The TVNZ Breakfast weatherman was put up for elimination by newly appointed captain of Team Mako Gary Freeman.

McLean came out second best - and was left in tears - in the ensuing challenge (a test of brute strength and balance) but he may be saved if Freeman plays his mercy card.

Earlier, as blackness enveloped the camp and Moses Mackay packed his belongings in preparation of shifting allegiance from Team Mako to Team Kahu he made a confession.

"It feels like I'm leaving home," he said glumly. "I'm trying to work out what's going to happen in the future."

The stunned faces of his teammates said it all, but Barbara Kendall said more when she summed up their situation, "It's a bummer, we thought we were playing and we got played."

Just before he began his lonely trek to the other side Kendall made a final plea, "don't tell them about our mercy card."

"No," he answered. In that moment he meant it. Then, he said, "see you on the battlefield," and walked away.

Over at team Kahu prep was underway to make their newest recruit feel welcome. They had fire. They had a banana. Best of all they had sausage rolls. "Let's show him all the love that we can," Sam Wallace said, echoing captain Shannon Ryan's sentiment. Despite the love in Mackay was apprehensive, only accepting a single sausage roll from the lovingly prepared platter. Although later he did describe the meaty treat as "a world of glory,". But would it be enough to see him give up his original team?

For Kahu, sadly not. The price of his loyalty higher than a sausage roll.

"I want to lay it out there," he said. "The clues remain with them. Everything that I was there, is there. It's a rebirth. I'm reborn here."

The next morning, however, he was a man alone.

"I couldn't sleep last night. I got told by Eric that they hadn't shared their clues, each individual that won the clue have kept it to themselves," he said, looking shocked. "They are playing very individual games. At the end of the day, they're all holding secrets." 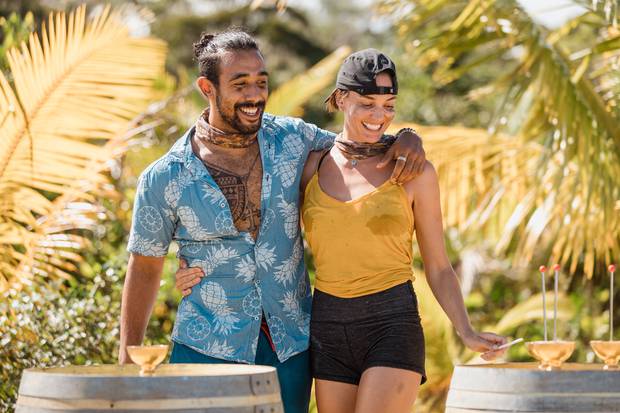 The distrusting nature of his new teammates was already bubbling to the surface. Having got nowhere grilling him to find out what cards his former captain Kendall was holding and getting nowhere, they'd resorted to speculation. Wallace correctly reckoning that Mackay's ignorance didn't add up due to Kendall's well-known oversharing strategy, which led to Ryan correctly guessing that she was in possession of an immunity card.

Still, they weren't about to cut him loose. Instead, they continued welcoming him, leading him to their war paint station and instructing him on the finer points of applying battle stripes to his face before they headed over to the day's challenge.

"We used to laugh at Team Kahu coming over with their war paint on," Mackay laughed dismissively to the camera. "I'd say, ''look at these goofballs'."

Meanwhile, over the other side of the island Mackay's former teammate, McLean had undergone a massive change of heart. Out in the jungle assisting their new captain, Gary Freeman gather a large bamboo pole with which to forage for coconuts he said, "All of a sudden I have this renewed energy where I should stop and remember this is an experience I've been wanting for the last 20 years."

And then the big bamboo pole he was holding slipped, bending to crack him right in his coconuts. This, we can assume, was not the experience he'd been after for two decades of his life. 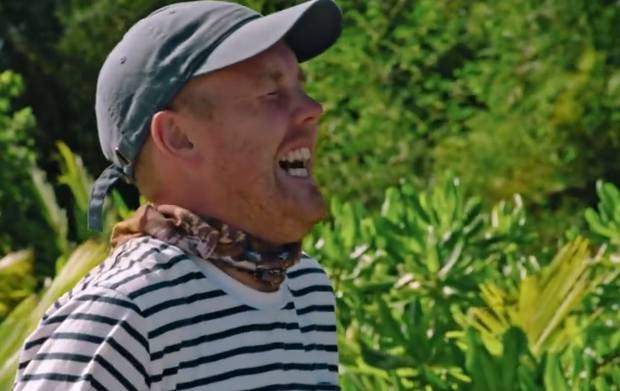 As he groaned and grimaced and tried not to keel over in pain, his captain Freeman comforted him by saying, "hurts don't it? When you get hit in the nuts."

Then it was time for the team battle. Before heading over Ryan revealed to the camera that she'd be watching Mackay's behaviour and performance closely.

"It'll give me a better understanding of how loyal he still is to blue," she slyly grinned.

If his attire was anything to go by she was right to do so. Having earlier turned down Wallace's generous offer to give him one of his own yellow shirts, he'd then rocked up to the challenge in the blue coloured shorts of his old team. 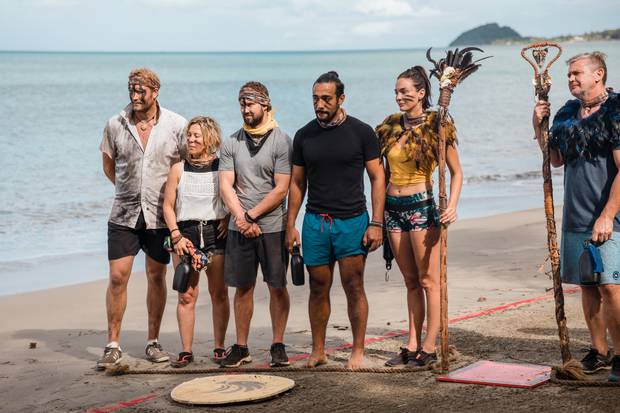 "We want him to be able to perform," Ryan explained to hosts Matt Chisholm and Bree Tomasel who'd quizzed him on his wardrobe choice, "So we're not going to throw him in something that's uncomfortable."

The challenge they faced was a relay race that combined swimming speed, strength and brainpower. The teams were tasked with swimming from one pontoon to another, where they'd grab a wooden box and swim to shore with it. From there they'd hand it over to the team's dedicated puzzle solver who, when in possession of all four, would open them and attempt to solve the puzzle. 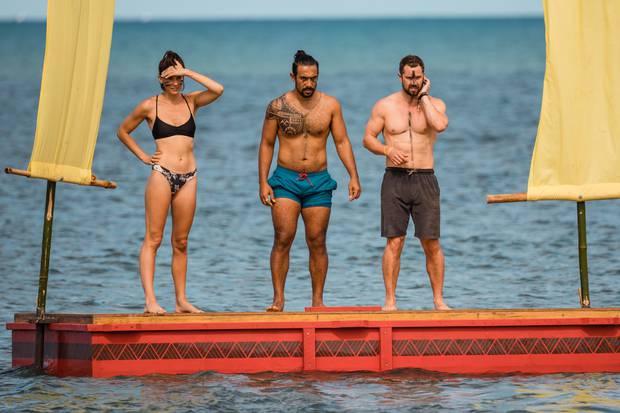 Kahu, almost squandered their early lead as Jodie Rimmer appeared stumped in her attempt to work out what "popular pirate's phrase" the jumble of letters spelt out. But she gained valuable time when Flava host Athena Angelou struggled to even get into her boxes, failing to untie the knots securing the lids on the boxes.

Eventually, a light bulb went off and Rimmer solved the puzzle, assembling the letters to read 'X marks the spot' and bringing victory to her team. 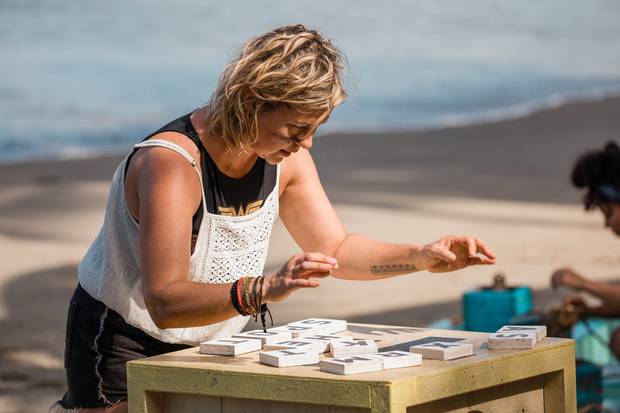 Kahu couldn't keep the joy off their faces at winning the challenge - and the accompanying prize of a cocktail party with drinks served by the captain and a member of the losing team. All of them bar Mackay that is, who couldn't hide the inner conflict he was feeling from showing on his outer face.

After the challenge, and under the guise of friendship, Wallace began pressing Mackay for info on the clues the other team had. But Mackay wasn't having it, feigning a bad memory and claiming he hadn't really paid that much attention to them.

"I didn't know I'd be coming over here," he said as a way of explanation.

"But you can remember songs really well," Ryan counted, having joined the pair after noticing the conspiratorial tone of their conversation.

"Yeah!" Wallace exclaimed pointedly as if Ryan had just revealed an evidential smoking gun. "You can!".

"We didn't share the answers," Mackay answered. "We just shared the clues."

However, his protestations weren't fooling anyone.

"Moses is a nice guy," Ryan later admitted to camera. "But he's a terrible liar."