Fans tuning into the latest episode of Nigella Lawson's television series At My Table were left fearing for the domestic goddess' health - after watching her put liberal amounts of salt into her latest dishes.

Clearly alarmed by the unhealthy addition, viewers quickly took to social media to suggest the cook should salt her food more responsibly, reports the Daily Mail.

Last night's episode saw Nigella briskly stirring the bulgur wheat on her stylish stove before she leaned over and reached for a small box of salt flakes.

Admitting she likes to "salt very generously", she was then seen adding two small measures of the condiment to the pan.

The mere sight of it seemed to raise the blood pressure of some viewers. 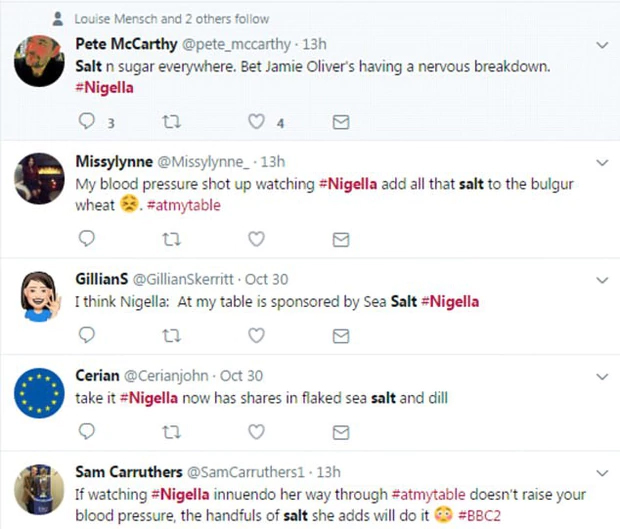 One, @emmadora, took to Twitter to say: "Bloody hell #Nigella that's not liberal with the salt, that's hypertension on a plate."

And she wasn't the only one; @angelathompson5 agreed, penning: "Everyone's blood pressure has shot to a dangerous level #salt #Nigella'.

@Lacerslife wrote: "Heck I love all of #Nigella, although maybe not quite that much salt..."

In true social media style, there were also gifs involved, with several Twitter users posting a gif showing a lorry unloading salt into a yard - to express their shock at the amount of the condiment used.

The latest series of At My Table kicked off last week, and the latest hour-long episode saw the 57-year-old once again wearing a beautiful silk dressing gown for part of the show.

The episode saw her creating breakfast waffles and beef and aubergine fatteh, accompanied by the well-salted bulgur wheat dish.

It was a calorific night for Nigella, who also added a semifreddo ice cream cake with passionfruit and a fried sandwich comprising brie, parma ham and figs.