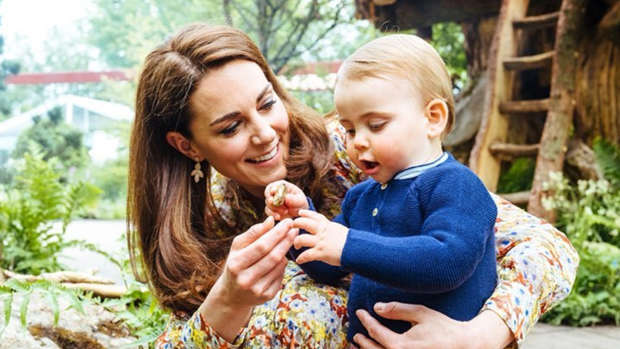 Kate Middleton has given the world an update on her youngest son, Prince Louis – and it is truly adorable.

Amidst the #Megxit drama, the Duke and Duchess of Cambridge stepped out for a public appearance in Bradford.

During their visit, Kate let slip some sweet news about her 21-month old's development.

Jo Broadbent who spoke with the royal when they met Bradford locals, told Hello Magazine:

"Kate obviously has a great interest in early years development, she’s quite knowledgeable about it, she referred to some of the tools and techniques we learnt about on the course." - referring to the 'Older Yet Wiser' course which Jo took to help care for their six-year-old granddaughter.

"I asked how her children were," she continued. "Kate said Louis had started to tell her 'Mummy, I'm balancing' and she said it was really nice to see him turning into a little boy from being a baby. She's obviously very proud of her children."

How cute is that?!

At one of Bradford’s two Khidmat Centres — which help the most vulnerable members of the community from minority ethnic backgrounds — The Duke and Duchess of Cambridge heard about the activities and workshops offered at the centre, and the organisations that they support. With 18 month old Sorayah The Duke and Duchess took part in a Little Dots workshop led by @betterstartbradford, which uses music and play to support children’s social, emotional and physical development, and support adult self esteem. At the Centre The Duke and Duchess also joined a @nearneighbours workshop, which brings together people from religiously and ethnically diverse communities across the UK to know each other better, build relationships of trust, and collaborate together on initiatives that improve the local community that they live in. Photos 📷 by Kensington Palace #RoyalVisitBradford #Bradford

Evoking memories of #RoyalVisitPakistan at @mylahore_ in Bradford — where The Duke and Duchess of Cambridge met students from @bradfordcollege on a kitchen apprenticeship scheme at the restaurant. My Lahore is a British Asian restaurant chain which has taken inspiration from Lahore, known as the Food Capital of Pakistan, visited by The Duke and Duchess in 2019. The Duke and Duchess tried their hands at making mango and kulfi milkshakes before sitting down to meet representatives from the UK Women’s Muslim Council and people who have benefitted from the Council’s Curry Circle. The Curry Circle, which is sponsored by MyLahore, is an initiative that provides a hot two-course meal for people who are homeless or struggling to feed themselves. Before departing, The Duke and Duchess met restaurant staff and also took the opportunity to catch up with British-Pakistani Boxer @amirkingkhan! Photos 📷 by Kensington Palace #RoyalVisitBradford #Bradford

It’s not the only titbit Kate shared about her children.

While meeting a group of women who were crocheting, Kate admitted she had attempted knitting not long after her eldest son, George was born – but ended up experiencing a bit of a mishap.

She told them: "I tried knitting when I first had George. I tried to knit him a very special jumper, but I got halfway down and it splattered. It's such an amazing skill."

Some highlights 🎥 from The Duke and Duchess of Cambridge’s visit to Bradford — one of the UK’s most diverse cities. From the @bradfordcollege apprentices at @mylahore_, to those working at one of the city’s Khidmat Centres to help the most vulnerable members of the community, to those supporting pregnant women and families @betterstartbradford and @nearneighbours working to build trusting relationships across different religions and communities — thank you everyone for the incredibly warm and friendly welcome for The Duke and Duchess today! Film 🎞️ by Kensington Palace #RoyalVisitBradford #Bradford