Kelly Clarkson contemplated suicide after being forced to lose weight at the start of her career.

The 35-year-old singer has admitted she was put under immense pressure to look good after her 2004 sophomore album Breakaway propelled her into the spotlight, and has revealed being forced to lose weight made her so "miserable", that she contemplated taking her own life.

She said: "When I was really skinny, I wanted to kill myself. I was miserable, like inside and out, for four years of my life. But no one cared, because aesthetically you make sense."

The Because of You singer - who previously battled an eating disorder when she was in high school - admits the period was a "very dark time" in her career.

She added: "I thought the only way out was quitting. I, like, wrecked my knees and my feet, because all I would do is put in headphones and run. I was at the gym all the time." 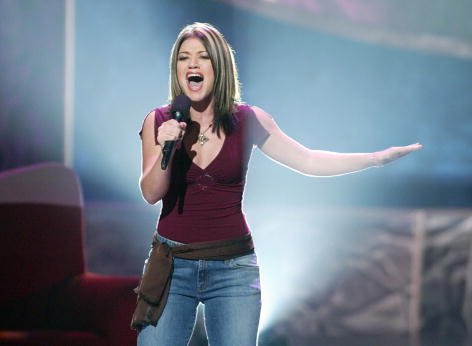 Kelly was signed to Clive Davis’ RCA Records at the time, and famously fought with him over the song selection of her 2007 album My December, but admits now that the songs on the record reflect the mottos she lives her life by.

The Piece By Piece singer - who later fired her manager Jeff Kwatinetz - told Attitude magazine: "There's a song on My December called Sober. There's this line - 'picked the weeds but kept the flowers’ - and I just live my life by that, because you are who you surround yourself with. I was around some really negative people, and I got out of it because I had a lot of great people there, too. It was a case of turning around, facing them and walking toward the light.”

Meanwhile, Kelly - who has three-year-old daughter River Rose and 18-month-old son Remington Alexander with her husband Brandon Blackstock - previously said she no longer “obsesses” over her weight, and is happy with her body.

Speaking two years ago, she said: "I don't obsess about my weight, which is probably one of the reasons why other people have such a problem with it. There are just some people who are born skinny and with a great metabolism – that is not me. I wish I had a better metabolism. But someone else probably wishes they could walk into a room and make friends with everyone like I can. You always want what someone else has."

If you need help:

There are lots of places to get support. For others, click here