For any woman on the eve of her wedding it might be a painful reminder.

For Meghan Markle, eight days before she marries Prince Harry in front of the Queen and the Royal Family and not forgetting a global TV audience of millions, that pain is possibly a little more acute.

Yesterday she awoke to learn details had emerged of a gallery of men she is said to have dated — all of whose identities, until now, she had managed to keep hidden, according to the Daily Mail.

But for the presence of one individual, their identity might have barely caused a ripple.

Yet among the chiselled ex-actors and sports stars who are reportedly former beaux, the figure of Simon Rex stands out.

Posing languidly stretched out naked on a bearskin rug, an unlit cigarette dangling from his mouth and with only a puppy to hide his modesty, he seems an unlikely suitor in the life of the poised young woman who next week will become Her Royal Highness and daughter-in-law to the Prince of Wales. 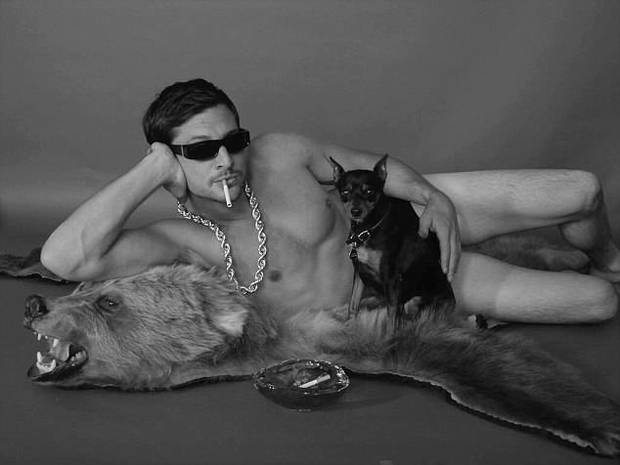 His first three films were "aimed" at the gay market. Indeed, he claims to have won an award for Best Gay Solo Video in 1997. Rex uses the reclining naked photograph on his Twitter home page where he also likes to post crude jokes. In a reference to engagement rings, he wrote the other day: "The bigger the diamond, the smaller the d***."

Elsewhere there is a picture of him posing in a Coca-Cola costume carrying the caption: "I think I have a coke problem."

All in all, he seems the unlikeliest of romances for Ms Markle. But according to the Sun newspaper, the two enjoyed a date in 2004 when Meghan was 22 and taking her very first steps as a professional actress with walk-on parts in daytime television.

They are said to have met on the set of a long-forgotten US sitcom called Cuts when they both had roles in the same episode.

He was already a successful model appearing in ads for Calvin Klein, Versace and Levi's while Meghan was still a year away from her first regular-money role as a 'briefcase girl' — holding up a case full of cash — on game show Deal Or No Deal.

He added: "In hindsight, it wasn't the best move."

For Meghan, Rex's moment of regret will barely register. Instead, any lingering hopes she may have had that her past life would remain off limits as she completes her transformation from Hollywood starlet to royal princess must surely now have vanished.

If it's any comfort, the Royal Family will scarcely raise an eyebrow at the revelations. As one figure close to the Royals told me: "It's a horrid little betrayal, but it won't damage her reputation. She's not a virginal bride like Diana, who was only just out of her teens when she married Charles, but a mature woman of experience with one failed marriage behind her."

The disclosures have come from Ninaki Priddy, once an inseparable friend of Meghan to whom she had been 'like a sister'. But their relationship is long over. Since Meghan's engagement to Harry she has spilled just about every intimate bean of their 30-year friendship.

It was Ms Priddy, you may recall, who revealed to royal biographer Andrew Morton that Meghan "was always fascinated by the Royal Family. She wants to be Princess Diana 2." Yet what emerges from these revelations is a picture of Meghan who, as a young woman, was not quite the confident and sophisticated figure whom Harry fell in love with. Meghan was vulnerable and as likely as any other twentysomething to chance her luck in the dating stakes.

Until now it had been thought that, for all her beauty, Meghan had been linked to only a handful of men, apart from her former husband, film producer Trevor Engelson and the Canadian chef who replaced him in her affections.

There had been the boy with whom she shared a first kiss, a high-school sweetheart, and a couple of others, none serious. But now we learn that she had a dating bible called The Rules, a self-help book aimed at women who want "marriage in the shortest time possible". Meghan studied the book — an instant bestseller when it came out in the mid-Nineties — so thoroughly she was able to recite passages off by heart.

According to Ms Priddy: "Meghan used to quote The Rules all the time and really put it into practice with a number of her boyfriends.

"She was never without a boyfriend for more than two or three months and always striving to have someone by her side. She liked the idea of being part of a team and having a domestic life."

Unsurprisingly some cover the period when she was away from home for the first time and a student at Northwestern University in Chicago.

Shaun Zaken was an actor and screenwriter with whom she enjoyed a six-month romance in 2003. Both had attended Northwestern and had ambitions to act. Shaun, now 38 and who played a waiter in an episode of Sex And The City, would rehearse his audition lines with her.

According to the Sun they split up because he would not make the commitment she wanted.

"His family are well-off with a home in the Hamptons [the upmarket resort on Long Island, close to New York] and he had good connections in Hollywood," a source told the newspaper. "She liked that "

Both were demanding of each other, claims the source, resulting in passionate rows in public. "She really pursued him because she saw a future with him. She was broken-hearted by their split."

How interesting that Zaken, now a comedy writer, penned a show last year about a fairy tale Prince Charming in modern-day Los Angeles.

After Zaken, Meghan is said to have dated another actor and writer called Brett Ryland. They were together for five months, but he was said not to possess the "kind of bravado or high profile she was looking for".

According to a friend, Brett, who lives in LA, 'adored Meghan. He was constantly trying to shower her with love and she enjoyed the attention, but she seemed to be in it more for the affirmation [emotional support].'

They are said to have stayed good friends. During her first year at university, Meghan went out with strapping 6ft 5in basketball star Steve Lepore. Her college friends were "impressed that she had snared a hottie".

The friend said: "She was very proud of having landed this handsome guy and happy to share photos of him. She spoke of how broad and beautiful his chest was. Steve was the star of the basketball team. She hadn't ever dated someone like that."

Then, after Lepore she is said to have had a nine-month romance with a wealthy fellow student. He is not named, though the newspaper reports: "She was very much in love with him, but it was a tempestuous relationship."

Meghan was said to have been "taken by his status" because his family were wealthy diplomats.

During her university years Meghan did work experience as an intern at the U.S. embassy in Buenos Aires. In 2002, she was said to have 'caught the eye' of a wealthy Argentine businessman.

According to the newspaper the encounter was "something of a liberation" for her. She was off in Argentina and had this "little adventure on the quiet.'

Interestingly, Meghan was also linked to another American who worked at the embassy. Or at least those are the rumours in the Argentine capital.

Looking back, it does seem these men were little more than footfalls in her romantic history. By 2004, she was with TV producer Engelson. In 2010, they were engaged and wed the following year, to separate two years later.

She had apparently met a fortune teller in Argentina who told her she would marry a man with "curly red hair". Engelson, of course is not the only figure in her life to have reddish hair. So, too, does Prince Harry.

Next week she will have pushed the far-from-welcome disclosures to the back of her mind as family and friends see them marry.

Her old friend Ninaki will not be there. She did not make the guest list.