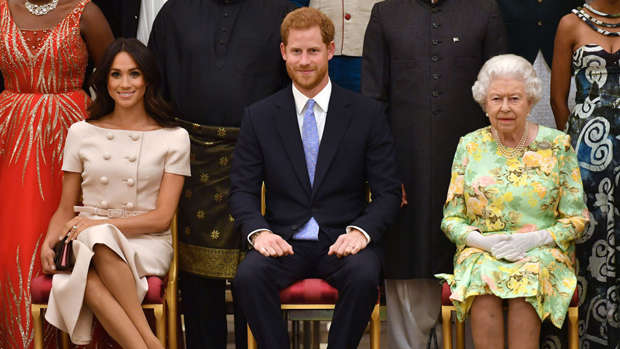 The Duchess of Sussex didn't join in with talks about her and husband Prince Harry's future on Monday because it wasn't felt "necessary".

The former actress is currently in Canada with her eight-month-old son Archie but it had been claimed she would join the discussion between Prince Harry, his grandmother Queen Elizabeth, father Prince Charles and brother Prince William by phone but it has now emerged she ultimately declined to be involved.

It has previously been reported by British media that Meghan had been "barred" from the talks, but a spokesperson for the royal family revealed that these claims were no more than rumours.

The royal spokesperson told MailOnline: "In the end, the Sussexes decided that it wasn't necessary for the duchess to join."

However, it is believed that Duchess Meghan was in contact with her husband in some form during the two-hour meeting.

After the princes all left the meeting at the Queen's Sandringham estate separately, a statement was issued from the 93-year-old monarch, in which she insisted she was "entirely supportive" of Meghan and Harry's decision to step down as senior members of the royal family.

A statement from Her Majesty The Queen. https://t.co/IVSyfeojqk

In a statement, she said: "Today my family had very constructive discussions on the future of my grandson and his family.

"My family and I are entirely supportive of Harry and Meghan's desire to create a new life as a young family. Although we would have preferred them to remain full-time working Members of the Royal Family, we respect and understand their wish to live a more independent life as a family while remaining a valued part of my family."

The Queen's statement went on to explain that Harry and Meghan will not be relying on "public funds" in their life outside of the royal family, and will be spending time in both the UK and Canada.

She continued: "Harry and Meghan have made it clear they do not want to be reliant on public funds in their new lives.

"It has therefore been agreed that there will be a period of transition in which the Sussexes will spend time in Canada and the UK."

The monarch says there is still "more work to be done" on the final negotiations, but she hopes talks will be finished within "the coming days".

She said: "These are complex matters for my family to resolve, and there is some more work to be done, but I have asked for final decisions to be reached in the coming days."

This comes after Queen Elizabeth II said she is "entirely supportive" of Prince Harry and Meghan, Duchess of Sussex, amid their decision to step down as senior members of the Royal Family.

The 93-year-old monarch said that whilst she "would have preferred" to see Harry, 35, and Meghan, 38, continue as "full-time working members" of the Royal Family, she is supportive of their final decision.