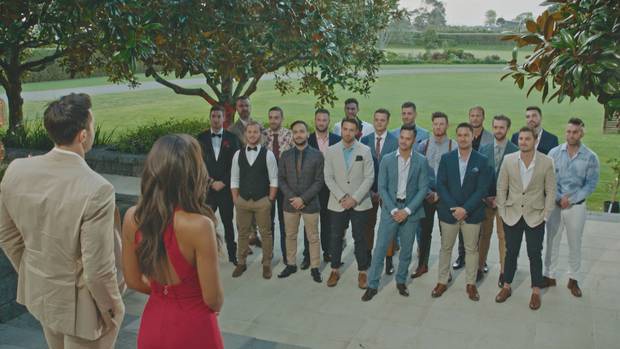 SPOILER ALERT: If you've not seen last night's episode of The Bachelorette NZ and want to do so without knowing anything of the foibles of the blokes vying for the affections of Lesina Nakhid-Schuster, do not even think about reading on.

Episode three begins right where we left off – at a nail-biting rose ceremony where Lesina has to decide who's the lost both the chance to spend the rest of their life with her and a lifetime of free medical advice.

If you watched last night's ep this elimination will come as no surprise – but in case you didn't, Brendan took Lesina on the world's most awkward park stroll where he informed her he doesn't feel a spark with her. Absolutely unreal right? Seeing as he's probably spent a grand total of three minutes one-on-one with her.

The helicopter pilot understandably does not receive a rose and has to swiftly choppa outta there to find girlfriend number 22.

Somehow Lesina bounces back quickly and takes Tavita on a romantic cruise around the harbour and they intimately re-enact that "I'm flying!" scene from Titanic. I know this sounds very innocent and lovely, but Lesina's wearing skintight leggings so it's all a bit sexy and the show's rating quickly leaps from P to PG.

If that wasn't saucy enough, the duo then enjoys a lovely romantic dinner on the yacht, during which Tavita is just wearing a towel with "no undies underneath". Stunning and brave.

The comando-ing couple (okay, okay, it was just Tavita who had no undies on, but whatever) then have a lighthearted teatime chat about toxic masculinity, and Tavita wins a rose for being a fabulous and evolved 2020 #WokeDude capable of talking about his feelings. Yes, Tavita! You are through to boot camp!

Fast forward a bit and we're following Glenn with two n's while he skulks around the garden, carrying a lemon and looking like the wicked witch from Snow White (okay, okay, she had an apple, but it was poisoned).

Back at the mansion/fraternity the rest of the #lads are tucking into a KFC feast of about 300 buckets in one of the most brazen product placements I've ever witnessed.

Later that arvo the #lads compete in a bizarre Smoke-Free Stage Challenge-esque competition hosted by Kita and Anita from House of Drag (NZ's version of RuPaul's Drag Race), allowing TVNZ to promote its other shows as well as fried chook.

Each "act" is more jarring than the last – but standouts include Quinn's naked backflip (we've now screamed from PG straight to R16) and Glenn's "rap" in which he attempted to woo a 32-year-old woman with a doctorate by saying he wanted her to sit on his lap. Amazing.

For Lesina, however, the clear winner was Logan and his dramatic reading of his homemade comic book - in which a lonely "baby Logan" and a lonely "baby Lesina" grow up searching for each other's souls. The book made me want to crawl out of my skin, but different strokes for different folks (and souls) I guess.

It's riveting stuff, but nothing like as riveting as another plot twist to all plot twists. Or at least some plot twists: Lesina announces that a SECOND BACHELORETTE will be joining her.

Clad in leather boots and a leather skirt, a mysterious woman appears at the mansion. She gets the same treatment as Lesina had in episode one, with the camera panning slowly from her feet up - only this time to stop at her waist.

PLOT TWIST. 🧐👠🌹 All will be revealed Sunday, 7pm on TVNZ 2 #thebachelorettenz!

Her identity won't be revealed until the next ep. Given that ensemble, my money's on Cheryl West though.

The Bachelorette New Zealand continues on Sunday at 7pm on TVNZ2.