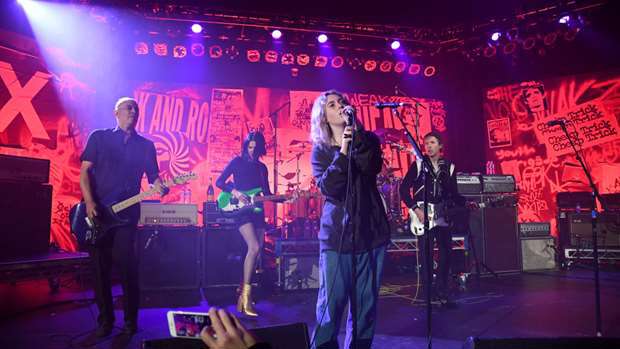 Dave Grohl's teenage daughter wowed the audience as she performed Kurt Cobain's vocals as part of Nirvana's second reunion show at the annual Heaven Is Rock and Roll Gala in Los Angeles.

Violet Grohl sang a haunting rendition of Heart-Shaped Box together with her father, who reclaimed his place on the drums, and fellow Nirvana members Krist Novoselic (bass) and Pat Smear (guitar), and guest performers St Vincent and Beck.

The 13-year-old has her own bands and has previously performed with her dad, including a duet cover of Billie Eilish's idontwannabeyouanymore at a 2019 charity show.

The band was billed as 'Dave and Friends' and comes after Nirvana first reunited at the 2014 Rock and Roll Hall of Fame with Kiwi pop star Lorde, Joan Jett and St Vincent on vocal duties.

Two years ago, Dave Grohl also recruited Novoselic, Smear, and Deer Tick's John McCauley to close out his own annual Cal Jam festival, after a headlining show by his band the Foo Fighters.

This time around the reunion show saw Grohl, St Vincent (Annie Clark), and Beck perform stirring renditions of Lithium (sung by St Vincent), In Bloom (shared by St Vincent and Beck) and Been a Son.

“most of nirvana” feat st vincent and beck !!!

But it was Violet's effort on Heart-Shaped Box, Nirvana's first single from their second full-length album In Utero, which had everyone talking.

Speaking to The Guardian in 2019, Grohl suggested his daughter may have a big future in the music industry.

"Maybe someday she'll be the singer in a band so someone else can pay the f***ing bills around here!" he joked.