There were no holds barred when Jeff Goldblum took to the stage to battle rap James Corden last night.

The legendary actor and accomplished jazz musician joined Corden for Drop the Mic, a battle rap game on Corden's talk show, The Late Late Show. But the host quickly realised he was in for a rough ride when Goldblum unleashed an initial flurry of verbal attacks taking aim at his starring role in the upcoming movie adaptation of the musical Cats.

"I saw the 'Cats' trailer and quickly noticed you/ You were the weirdest part of it and that's hard to do," Goldblum spat, getting all up in Corden's grill. The Cats trailer has been widely derided as creepy and weird looking since it was released last week.

But the actor wasn't done there. Dropping a rap-bomb on the host Goldblum managed to express disbelief that Corden had procreated and delivered one of his most iconic lines to finish him off.

Corden was left open-mouthed and speechless by the onslaught but attempted to rally.

"Your role in the movie Thor, you should be ashamed / You're the only Marvel character not in Endgame," he rapped. He gained a little ground finishing his verse with, "You're wife's a gymnast and that's for the best / cause finding you attractive must really be a stretch." 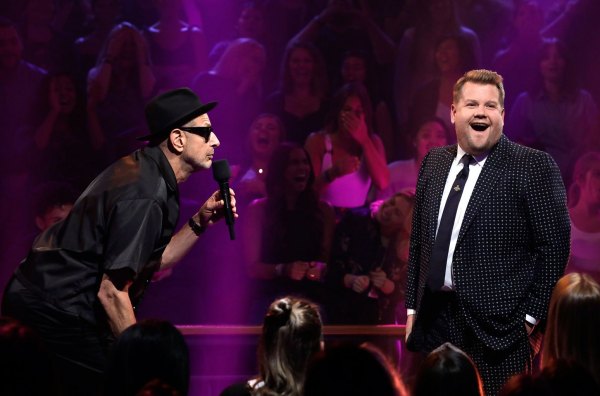 The punt didn't pay off as the crowd began to turn on Corden for the low-blow shot and it served only to fire Goldblum up.

"You host the Tonys for actors who sing, which is funny because you suck at both those things," he began, before wrapping his verse up with, "When you were born, I was already 25/ Which means I've been a sex symbol longer than you've been alive."

Corden kept shooting for the comeback, ("The fact you're still popular is just crazy/ And proof they'll bring back any shit from the '80s," he rapped in his final bar) but it was a comfortable victory for the ruthless Goldblum.

"I saw Ocean's 8 and that really was a switch," he rapped winding up to his triumphant conclusion, "it starred eight awesome women and one giant b****," and dropping the mic.