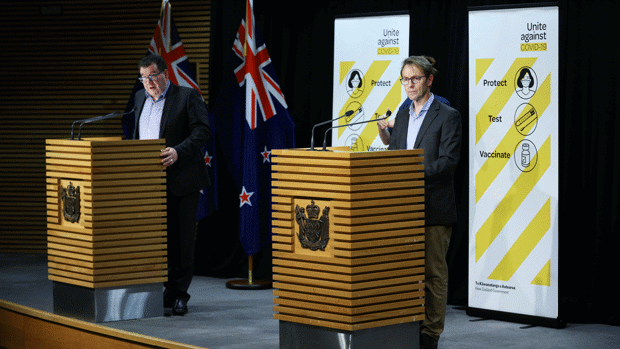 There are 11 community cases of Covid-19 in New Zealand today, Dr Ashley Bloomfield has announced.

This takes the total number of cases in the Delta outbreak to 879.

There were also six cases in managed isolation and two historical cases.

Bloomfield said there were now 29 unlinked cases under investigation in the outbreak, including six today.

Of yesterday's cases 12 were household contacts and just one infectious while in the community.

Of the unlinked cases, there were a small number investigated very thoroughly, including two at Middlemore Hospital.

On the new locations of interest, Bloomfield said people should be tested immediately whether they had symptoms or not.

There were 27 people currently in hospital, all in Auckland, including four in ICU.

The update comes as a plane carrying 250,000 urgently-needed Pfizer vaccine doses arrived from Spain this morning in Auckland.

The extra Pfizer supplies were sourced from Spain in a Government deal announced yesterday to keep up with surging vaccine demand.

Earlier, the Countdown supermarket in Auckland's Manurewa was closed for deep cleaning after a positive case visited the supermarket yesterday afternoon.

A staff member confirmed they were closed this morning, but are due to re-open this afternoon.

A Countdown spokeswoman said: "We're following the advice of the health authorities and any of our team who were working at the time of the visits are self-monitoring for Covid-19 symptoms for 14 days after the exposure and will get tested if they develop any symptoms.

"None of our team are required to self-isolate and the store has reopened."

On Thursday just 13 new cases were revealed, continuing a steady decline over the past week.

Testing numbers have also dramatically increased as authorities work to stamp out any risk of undetected community spread.

Experts suggest drop in alert levels could be on the cards

Experts say all things going well the virus could be again eliminated in the next few weeks, and more positive news could point towards dropping alert level in Auckland come Cabinet's meeting on Monday.

"Sometime over the next couple of weeks, we will eliminate it," University of Auckland Covid-19 modeller Shaun Hendy says.

He told TVNZ's Breakfast that the system and people working on the frontline - essential workers and medical staff carrying out Covid tests, for example - had done "an incredible job" that was now reeling in results.

He said it was "certainly possible" that Auckland could drop down to level 3 as early as next week.

New Zealand was seeing the tail-end of this current Covid outbreak, he said.

He acknowledged that even he was surprised - as were other Covid modelling experts - at the positive signs that New Zealand was about to eliminate Covid in the community again.

Meanwhile, achieving the highest possible vaccination rate is "absolutely critical" to any plans to start reopening the borders, says a public health expert.

That task will become easier this morning when an extra 250,000 Pfizer vaccines are due to arrive from Spain, followed by an even larger shipment due next week from a different country.

The extra supplies are in addition to the 10 million originally purchased directly from Pfizer.

Professor Nikki Turner said the extra vaccinations meant the country could now keep up with the surging demand since Delta arrived here.

The shipment is in addition to the 10 million originally purchased directly from Pfizer.

While Prime Minister Jacinda Ardern would not reveal the price, she said it came with "no premium" compared to purchasing straight from Pfizer.

Another "much larger" shipment would be announced next week from a different country, Ardern said.