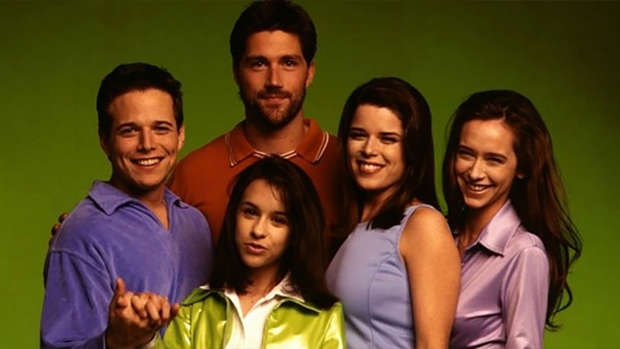 Party Of Five was one of the hottest shows in the 1990s.

It starred Jennifer Love Hewitt, Neve Campbell, Scott Wolf, Lacey Chabert and Matthew Fox and focused on a group of kids in San Franciso with no parents but plenty of heart.

Now, according to the Daily Mail, the show is getting rebooted. But instead of the characters being US natives, they will be, according to The Hollywood Reporter. According to the site, shows about immigrants are all the rage after Donald Trump took office.

The reboot will use its original series creators Chris Keyser and Amy Lippman to develop the new series.

The new series would focus on a family that immigrated to the United States. It is not known where from.

After their parents die in a car accident, the five Salinger siblings are forced to live on their own, with oldest son Charlie appointed the guardian of his brothers and sisters.

He has to make sure ends meet as he keeps the family together.

It made stars of Neve, Fox, Chabert and Wolf, who were previously unknown. Hewitt, who was a guest star, already had a career as a singer. She went on to become the biggest star of the series thanks to films like I Know What You Did Last Summer and the TV series The Ghost Whisperer.

Party Of Five won a Golden Globe in 1996 for best drama.

Another reboot from a previous era is Will & Grace starring Debra Messing, Eric McCormack, Sean Hayes and Megan Mullally.

The show, which kicks off Monday, James Burrows, director of every original Will & Grace episode, returns along with writers and producers Max Mutchnick and David Kohan.

Other upcoming reboots include True Lies (Fox), The Jetsons (ABC), The Munsters (NBC) and Starsky and Hutch (Amazon).