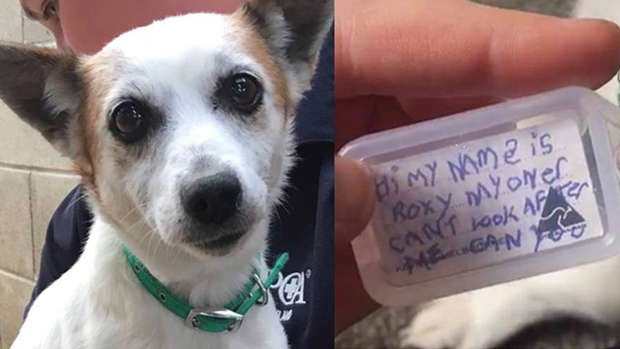 Roxy was found in the Howick area wearing this tag. Photo / Facebook

SPCA Auckland are appealing to help from the public after a "sweet natured" Jack Russell named Roxy was found wandering the streets wearing a name tag with a heartbreaking note attached.

According to an SPCA Facebook post the little white dog was found running around shops near Uxbridge in Howick by a member of the public who brought her in to the animal shelter.

Roxy is described as wearing a green collar with a tag and a message that reads: "My name is Roxy my owner can't look after me can you?"

SPCA shared the little dog's picture alongside the comment: "We are reaching out in the hope that someone recognises Roxy and can tell us more about her. All information we receive will be treated as confidential."

The organisation also took the opportunity to remind people that, while circumstances can change and people cannot always care for their animals forever, it is an offence to abandon a pet.

"We understand that circumstances can change for pet owners, and that sometimes families are in a position where they genuinely can't care for their animals anymore - we want you to know there is always another option and people who can help.

"Abandoning an animal like this is an offence under the Animal Welfare Act 1999 ..." Facebook users were quick to jump to the defence of the owner, believing it was likely an elderly person who may have felt they had no other option. 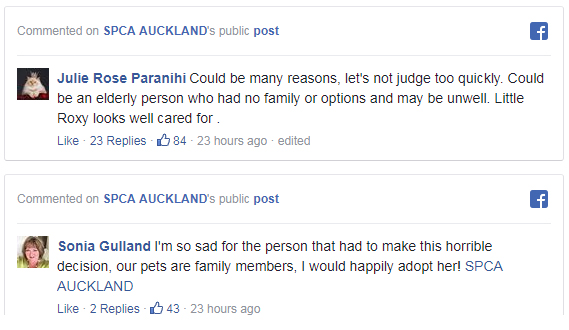 The SPCA replied that while they do understand that Roxy's owner may have faced tough times, they still want them to know there are other options available.