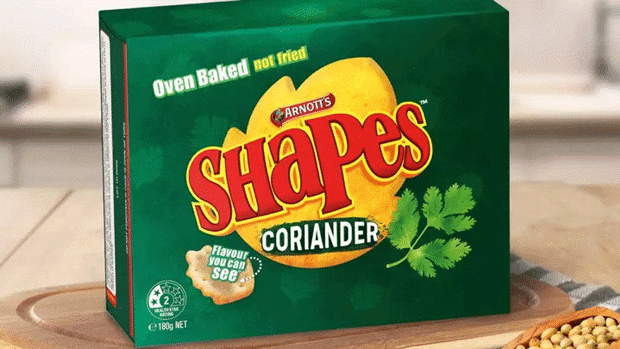 Shapes are known for being the biscuits with containing tasty bursts of staple savoury flavours that everyone loves.

But now Arnott’s who make the delightful crackers has suggested a new flavour that has left everyone very divided.

It’s the one herb that people either absolutely love, or completely hate. In fact, some people possess genes that make coriander taste like soap. Blegh!

Taking to Facebook Arnott’s gauged the reaction of Shape fans, and of course, more than a few people were left aghast!

"What is the world coming to? First COVID. Then Coriander Shapes. I can't take anymore," said one of the 6.9K people who responded.

"I love coriander but I still have to ask: Why, when so many people hate coriander? Even I would NOT buy these," another person said.

Another added: "Hmmm soap flavoured, they would make a great pallet cleanser."

However, there were some who were completely in love with the idea of a coriander cracker.

"If you are needing some testers I volunteer as tribute!" one excited fan wrote.

Sadly - or thankfully depending on your coriander views – it seems like we won’t be seeing Coriander Shapes hit supermarket shelves any time soon, with Arnott’s including the hashtag #DontWorryWeAreNotActuallyMakingThese in their post.